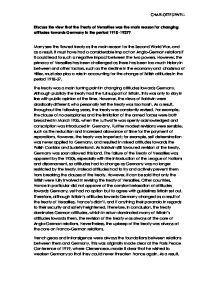 Discuss the view that the Treaty of Versailles was the main reason for changing attitudes towards Germany in the period 1918-1937?

Discuss the view that the Treaty of Versailles was the main reason for changing attitudes towards Germany in the period 1918-1937? Many see the flawed treaty as the main reason for the Second World War, and as a result, it must have had a considerable impact on Anglo-German relations if it could lead to such a negative impact between the two powers. However, the primacy of Versailles has been challenged as there has been too much history in between and other factors, such as the decline in the economy and charisma of Hitler, must also play a role in accounting for the change of British attitudes in the period 1918-37. The treaty was a main turning point in changing attitudes towards Germany. Although publicly the treaty had the full support of Britain, this was only to stay in line with public opinion at the time. However, the views of Baldwin were drastically different; who personally felt the treaty was too harsh. As a result, throughout the following years, the treaty was constantly revised. For example, the clause of no aeroplanes and the limitation of the armed forces were both breached in March 1935, when the Luftwaffe was openly acknowledged and conscription was introduced in Germany. ...read more.

However, French fears were not the only problems which may have accounted for a change in attitude towards Germany. A decline in the economy was closely linked to the Treaty of Versailles, mostly because of the economic consequences of peace, as suggested by Keynes, who suggested that as a result of peace, the economy is in such a poor state that it leads to war. It can be argued that the Treaty of Versailles failed as Germany was not included within the European economy, and as a result, lost many trade links. However, at the time of economic difficulties, Britain was facing its own problems at home, such as the overwhelming number of unemployed people, especially after 1929. However, at this point, as Britain was facing more difficulties at home, they did not have the opportunity to help Germany out in their crisis. However, by the end of the year, the Hoover Moratorium suspended Germany's reparation payments. It has been said that if more were done to attain economic appeasement, it may have encouraged more moderates in Germany, reducing the influence of extremists, such as Hitler. Therefore, obviously the chance in economy had an effect on the attitude towards Germany. ...read more.

Furthermore, it did not change Britain's position in world relations, as it only gave Britain time to negotiate and did not affect appeasement. This is a further example of how Britain became much more reactive to the 'needs' of Germany, and instead of collectively punishing Germany for ignoring the sanctions of the treaty of Versailles, they just defended themselves from further possible danger. Therefore, in conclusion, changes in interpretation of Versailles were the driving force for change in British attitudes to Germany. Changes were brought about by the attitude of France, the economic situation and the rise of politicians. However, all of these factors occurred as a result of the Treaty of Versailles. France no longer wished to be threatened by Germany, and this could be prevented as a result of the treaty. The economic situation was brought about by the many sanctions and reparation payments placed upon Germany from the treaty of Versailles. The rise of certain politicians, Hitler in particular was a result of the treaty who opposed it in times that extremism would have been welcomed by the desperate Germany people. Therefore, the major issue dominating Anglo-German relations was definitely the Treaty of Versailles. Although there were different factors, they were all a result of the treaty. ?? ?? ?? ?? CHARLOTTE SEWELL ...read more.