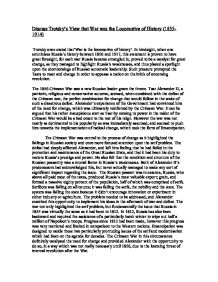 Discuss Trotsky's View that War was the Locomotive of History (1855-1914) Trotsky once stated that 'War is the locomotive of history'. In hindsight, when one scrutinises Russia's history between 1856 and 1917, this statement is proven to have great foresight, for each war Russia became entangled in, proved to be a catalyst for great change, as they managed to highlight Russia's weaknesses, and thus placed a spotlight upon the shortcomings of Russian autocratic leadership. Such pressure prompted the Tsars to react and change in order to appease a nation on the brink of oncoming revolution. The 1856 Crimean War saw a new Russian leader grace the throne. Tsar Alexander II, a patriotic, religious and conservative autocrat, seemed, when combined with the defeat of the Crimean war, the perfect combination for change that would follow in the wake of such a disastrous defeat. Alexander's experience of the Government had convinced him of the need for change, which was ultimately reinforced by the Crimean War. It can be argued that his rather inauspicious start as Tsar by coming to power in the midst of the Crimean War would be a bad omen to the rest of his reign. However the war was not nearly as detrimental to his popularity as was immediately assumed, and seemed to push him towards the implementation of radical change, which took the form of Emancipation. The Crimean War was central to the process of change as it highlighted the failings in Russian society and once more focused attention upon the serf problem. The defeat had deeply affected Alexander, and left him feeling that he had failed in the protection and maintenance of the Great Russian State, and that it had been his duty to restore Russia's prestige and power. He also felt that the condition and structure of the Russian peasantry was a crucial factor in Russia's weaknesses. Both of Alexander II's predecessors had acknowledged this, but never actually managed to make any sort of significant impact regarding the issue. ...read more.

Years of repression combined with a failed military campaign could only be bad for Nicholas. A strong and decisive leader may have coped with this scenario. Nicholas appointed Prince Mirsky to be Minister of the Interior. It was a disastrous appointment. He believed in his own importance - he must, in his mind, be able to be appointed by the tsar to such an important position. In Mirsky's first press conference, he asked for the people to be confident in the government and to those present seemed to offer the chance of reform. This led to him being reprimanded by the tsar but the damage had been done. Many now expected reform and would accept nothing less. In fact, Mirsky's lack of political experience was exploited here. In the past, a tsar had refused all calls for any form of a national meeting to discuss "issues". Such a meeting might lead to calls for a national assembly. The fact that Mirsky did allow such a meeting to go ahead, was a sign that autocracy was starting to be challenged. The Russo Japanese War had clearly lead to Revolution in 1905, and for the first time in October the Tsarist regime was faced with its most united opposition in Tsarist history. Concession seemed inevitable in an attempt to divide opposition. An attempt to try and appease the Liberals lead to the creation of the 'October Manifesto', which was the effective establishment of a legislative Duma, which was to act as a Parliament with law making powers. The manifesto also contained a promise to introduce a wide range of civil rights such as free speech and the legalising of trade unions. The liberals were, for the time being satisfied and their thirst for reform, temporarily quelled. The peasants were also seduced by the eventual abolishment of redemption payments. The liberals and the peasants were easily satisfied by bribery, however industrial workers would not be so easily convinced and it was clear a more violent approach was indispensable. ...read more.

Michael's refusal to accept the throne marked the end of Imperial Russia. Russia's participation in war, and more significantly defeat that left the nation in tatters, again proves Trotsky correct. The defeat resurfaced rife discontent that had been omnipresent in Russia after each and every war. War was the outlet for the discontent, and allowed Russians to unite and force change by means of revolution. Defeat in World War One had had the same impact as the previous two wars of 1856 and 1905, however this time there was no defence and the result was the collapse of autocracy and Romanov rule. War was the main ingredient that catalysed the need for change and granted the opportunity for this change to occur. War in Russia had brought to the surface the underlying issues that had always been close to erupting and were finally allowed to do so again by the impact of war, which indeed again, succeeded in being the locomotive for change and history. However, change cannot be merely identified as measures introduced and carried out by the Tsars, but change must also be identified as the changes in the attitudes and mindset of the population. Obviously change was introduced on a practical level, such as the concessions granted after 1905, but many many attitudes were changed in the aftermath of the wars that were very significant because every time a war arose, changes were implemented which influenced peoples opinions and attitudes to the regime. The constant wars and revolutions that riddled Russia always influenced peoples' judgments and this definitely lead to the eventual over throwing of the Tsarist regime. So all in all, it is fair to conclude that Trotsky's statement is indeed very true, and significant to understanding the impact of war upon a nation. However, it can be argued is it war that causes change, or the defeat in war that leads to change. Either way, war can be highlighted as the principal component in creating change, and I believe this would happen whether a country benefits from victory or suffers defeat. ...read more.