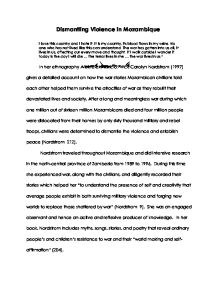 Dismantling Violence in Mozambique I love this country and I hate it. It is my country, its blood flows in my veins. No one who has not lived like this can understand. The war has gotten into us all, it lives in us, affecting our every move and thought. If I walk outside I wonder if today is the day I will die ... the terror lives in me ... the war lives in us.1 In her ethnography A Different Kind of War, Carolyn Nordstrom (1997) gives a detailed account on how the war stories Mozambican civilians told each other helped them survive the atrocities of war as they rebuilt their devastated lives and society. After a long and meaningless war during which one million out of sixteen million Mozambicans died and four million people were dislocated from their homes by only sixty thousand military and rebel troops, civilians were determined to dismantle the violence and establish peace (Nordstrom 212). Nordstrom traveled throughout Mozambique and did intensive research in the north-central province of Zambezia from 1989 to 1996. During this time she experienced war, along with the civilians, and diligently recorded their stories which helped her "to understand the presence of self and creativity that average people exhibit in both surviving military violence and forging new worlds to replace those shattered by war" (Nordstrom 9). ...read more.

Returning soldiers underwent ceremonies which "removed the war from them" (Nordstrom 147). Ceremonies were also held to calm the spirit of the dead, whose death was meaningless, or they were deprived of a proper burial, so that their spirits would not come back and harm their families and communities (Nordstrom 161,162). Stories of atrocities were shared. Children sang: To talk about a child is to talk of millions of ragged faces innocent victims ... To talk about a child is to shout loudly DOWN WITH CORRUPTION DOWN WITH WAR LONG LIVE PEACE.2 Ordinary Mozambicans were determined to put years of dehumanization aside and build a new socio-political culture for themselves. The dynamic to survive was more powerful than the dynamic of violence itself. In resistance to the government troops of Frelimo and the rebel troops of Renamo, a third group emerged. Manual Antonio, a curandeiro (healer and spirit medium), formed the traditional army, the Parama, to save the country from the atrocities of Renamo. He claimed to be "'the blood of the people.' ... He represented the will of the people to free their lands and lives" (Nordstrom 59). Manual Antonio 'vaccinated' his troops through rituals to make them resilient to bullets and taught them to respect the civilians. But soon they too became violent and abused their power leaving the people with no protection against violence (Nordstrom 61). ...read more.

The Mozambican society is flexible and changing in terms of accepting and refusing violence. They proved that they can learn and unlearn violence. They are "calculating beings ... able to calculate the consequences of their own behaviour" as well as the "behaviour of others" as it is apparent in their skill of sharing knowledge and telling stories to suit their needs (Carrithers 199). Their "social intelligence" of reconstructing stories had the power of persuasion and thus, "conveye[d] moral standards" (Carrithers 203). Carrithers concludes, "Individuals' sociality is the condition which makes possible collective changes" (Carrithers 207). It is this emergence of individuality that Nordstrom observed in the civilian Mozambicans who, out of chaos and shuttered lives, reconstructed their socio-cultural practices. In conclusion, the importance of stories in A Different Kind of War is twofold. First, they helped Nordstrom to understand the war and make sense of the injustices. Second, the stories helped the people of Mozambique to survive the war while they shared their experiences and realized that they were not alone and that they could collectively forge a new life. Their gruesome experiences linked people and empowered them to take collective action against violence. Creatively they set out to "take the war out of people" and to dismantle violence from individuals and communities. Hopefully the terror of war remains in them and the scars on their bodies and their souls will continue to be a lesson restraining them from repeating past mistakes. ...read more.