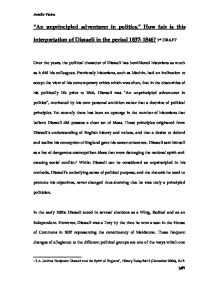 Disraeli an unprincipled adventurer in politics

"An unprincipled adventurer in politics." How fair is this interpretation of Disraeli in the period 1837- 1846? 1st DRAFT Over the years, the political character of Disraeli has bewildered historians as much as it did his colleagues. Previously historians, such as Machin, had an inclination to accept the view of his contemporary critics which was often, that in the obscurities of his politically life prior to 1846, Disraeli was "An unprincipled adventurer in politics", motivated by his own personal ambition rather that a doctrine of political principles. Yet recently there has been an upsurge in the number of historians that believe Disraeli did possess a clear set of ideas. These principles originated from Disraeli's understanding of English history and values, and that a desire to defend and realize his conception of England gave his career coherence. Disraeli saw himself as a foe of dangerous cosmopolitan ideas that were damaging the national spirit and creating social conflict.1 Whilst Disraeli can be considered as unprincipled in his methods, Disraeli's underlying sense of political purpose, and the rhetoric he used to promote his objectives, never changed thus showing that he was truly a principled politician. In the early 1830s Disraeli stood in several elections as a Whig, Radical and as an Independent. However, Disraeli was a Tory by the time he won a seat in the House of Commons in 1837 representing the constituency of Maidstone. These frequent changes of allegiance to the different political groups are one of the ways which one can claim Disraeli to be unprincipled but was he? Disraeli claimed that his switch to conservatism was due to his belief in the fact that Conservatives defended the interests of the people. This claim for can be proven by the fact that in the 1822 the Tory party under Lord Liverpool's administration argued for the rights of Dissenters and even repealed the Test and Corporations Act which allowed for protestant dissenters to hold positions in public office. ...read more.

In addition, due to his unconventional education, Young England was also vital to Disraeli as it allowed him to network within the Conservative party despite the fact that he was an outsider due to his Jewish ethnicity and middle class background. One can also argue that Disraeli showed a clear commitment to the ideologies of Young England due to his writings. Disraeli's novels Coningsby (1844), Sybil (1845) and Tancred (1847) all show concern about poverty and the injustice of the parliamentary system. In Coningsby, Disraeli attacked the Tamworth Manifesto as 'an attempt to construct a party without principles'. Moreover, his subsequent novel Sybil shows the start of one nation Toryism as it shows concern about the development of two nations causing a schism in society. This novels are critical as they all show Disraelian principals since all the novels show a continuation of Disraeli's beliefs of a Romantic notion of government and desire for reform and in this way can be said to be principled. Moreover Young England is proof of Disraeli's principles as it shows that his belief in a Romantic system of government and paternalism was as present in his ideals as a young man, as they were when he was Prime minister in the 1870s. The main argument for Disraeli being an 'unprincipled adventurer' in politics is often due to his relationship with Peel. There are often three main views to this section of Disraeli's early political career. The first view is that Disraeli led his attack on Peel for revenge. According to Norman Lowe Disraeli was 'furious when Peel did not offer him a place in his 1841 cabinet and perhaps because of this Disraeli lead the attack on Peel over the Corn Law repeal'12.However this account for Disraeli's attack on Peel is highly flawed. In his biography on Disraeli, Christopher Hibbert claims that in 1844 Peel had wrote to Disraeli apologising for dismissing his offer to work in his cabinet and stating that if he had offended Disraeli it ...read more.