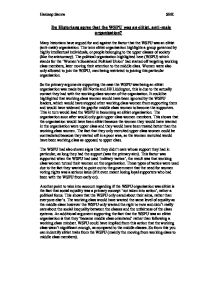 Do Historians agree that the WSPU was an elitist, anti-male organisation?

Another point to take into account regarding if the WSPU organisation was elitist is the fact that social equality was a primary concept 'not taken into action', rather a political focus. This shows that the WSPU only cared about their aims, rather than everyone else's. The working class would have wanted the same level of equality as the middle class however the WSPU only wanted the right to vote and didn't really care about the social inequality between the classes and the unfairness of the class systems. An additional argument supporting the fact that the WSPU was an elitist organisation is that they 'became middle class orientated' rather than following a working class mindset. WSPU could have implied from this action that the working class wasn't significant enough, as compared to the middle classes. So from this you can indentify elitist traits from the WSPU (mainly the moving from working class to middle class members). However, they are certain arguments raised on the other side (against the WSPU being elitist). Firstly, the WSPU had started off by recruiting working class women; this in turn highlights the fact that upper classes were not only selected to join the organisation. ...read more.

This supports the fact that the Labour party helped keep the support of the working class for the WSPU and the fact that the WSPU started off as and remained a working class organisation, which is the opposite of the WSPU being an elitist organisation. Barbara Winslow most likely wouldn't have shown aspects of a bias opinion due to the fact she was an author (having no particular motive). Her opinion could be taken into account because she would be more likely to make a fair decision about the WSPU being an elitist organisation. The anti-male attitude was clearing shown in the WSPU; this is because women wanted independence (the vote) against men. Also, the WSPU didn't co-operate with organisations that had male members, such as NUWSS. This shows that they didn't value men's opinions or support of the franchise, even though men would have been able to make a difference in a patriarchal society. So taking all these points into consideration, I can say that the WSPU was an elitist organisation and they also shown anti-male attitudes. This is because they favoured the middle classes rather to the traditional working classes and also viewed men to be barrier to their work progress. ...read more.