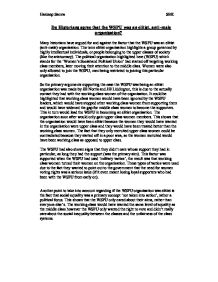 Do Historians agree that the WSPU was an elitist, anti-male organisation?

Do Historians agree that the WSPU was an elitist, anti-male organisation? Many historians have argued for and against the factor that the WSPU was an elitist (anti-male) organisation. The term elitist organisation highlights a group governed by highly intellectual individuals, or people belonging to the upper classes of society (like the aristocracy). The political organisation highlighted here (WSPU) which stands for the 'Women's Social and Political Union' had started off targeting working class members, later moving their attention to the middle class. Women were also only allowed to join the WSPU, men being restricted to joining this particular organisation. ...read more.

Another point to take into account regarding if the WSPU organisation was elitist is the fact that social equality was a primary concept 'not taken into action', rather a political focus. This shows that the WSPU only cared about their aims, rather than everyone else's. The working class would have wanted the same level of equality as the middle class however the WSPU only wanted the right to vote and didn't really care about the social inequality between the classes and the unfairness of the class systems. ...read more.