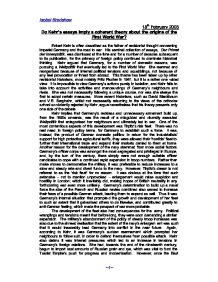 Do Kehr's essays imply a coherent theory about the origins of the First World War?

18th February 2003 Do Kehr's essays imply a coherent theory about the origins of the First World War? Eckart Kehr is often described as the father of revisionist thought concerning imperial Germany and the road to war. His seminal collection of essays, Der Primat der Innenpolitik, was dismissed at the time and for a number of decades subsequent to its publication, for the primacy of foreign policy continued to dominate historical thinking. Kehr argued that Germany, for a number of domestic reasons, was pursuing a Weltpolitik that eventually led to the First World War. She rearmed and reorganised because of internal political tensions and squabblings, not because of any real provocation or threat from abroad. This theme has been taken up by other revisionist historians, most notably Fritz Fischer in 1961, but it is a rather one-sided view. It is impossible to view Germany's actions purely in isolation, and Kehr fails to take into account the activities and manoeuvrings of Germany's neighbours and rivals. She was not necessarily following a unique course, nor was she always the first to adopt certain measures. More recent historians, such as David Blackbourn and V.R. Berghahn, whilst not necessarily returning to the views of the orthodox school so violently rejected by Kehr, argue nevertheless that his theory presents only one side of the debate. ...read more.

Political wranglings and tensions meant that before long, they were soon demanding a similar expansion. The military's abandonment of the policy of steady troop increases was also due to the shrewd realisation that the extent of the navy's enlargement was such that it would inexorably lead Germany into conflict in the near future. Again, according to Kehr, it was Germany's sudden rearmament which prompted her neighbours to follow suit, in order to defend themselves from possible attack. Kehr also claims it was internal pressures which led to an increase in tensions in Germany's foreign relations. She had, towards the end of the nineteenth century, begun to import vast amounts of Russian grain and rye, which was vital to fund the Tsarist Empire's push for progress and modernisation. However, once the East Elbian landowners had introduced tariffs to protect their own agricultural interests, the effects on the Russian economy were dramatic. Thus domestic policies influenced Germany's foreign affairs, for this new policy led to a severe deterioration in Russo-German relations, and meant that, because the adage "countries who trade with one another do not fight each other" no longer applied, it was more likely that, in any future conflict, the two would be on opposite sides. ...read more.

Kehr's essays do present a coherent theory as to the origins of the First World War. It is possible to see how Germany's domestic actions could have led her towards war, and to go even further, as Fischer does in his Germany's Grasp for World Power in 1961, that 1914 was the outbreak of a world war that she had been actively working towards since 1912. Kehr does not go quite so far, but he refuted the previously held belief that Germany was innocent in the build up to war (indeed, his claims have a curious resonance in Friedrich Meinecke's Die deustche Katastrope, when he holds Prussian-German militarism for the event of World War One - curious because Meinecke was one of the historians Kehr had in mind when countering the orthodox point of view). However, Kehr's theory, no matter how coherent, is not necessarily correct. This debate has raged for decades, and will, no doubt, continue for many more, but the behaviour of other European powers, and their impact on Germany and the outbreak of war should also be taken into consideration. Placing the blame on Germany alone is to be as one-sided as those who Kehr was contradicting in his essays. ...read more.