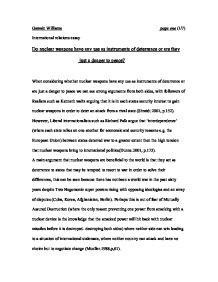 Do nuclear weapons have any use as instruments of deterrence or are they just a danger to peace?

Gawain Williams page one (1/7) International relations essay Do nuclear weapons have any use as instruments of deterrence or are they just a danger to peace? When considering whether nuclear weapons have any use as instruments of deterrence or are just a danger to peace we can see strong arguments from both sides, with followers of Realism such as Kenneth waltz arguing that it is in each states security interest to gain nuclear weapons in order to deter an attack from a rival state (Shmidt.2001, p.152). However, Liberal internationalists such as Richard Falk argue that 'interdependence' (where each state relies on one another for economic and security reasons-e.g. the European Union) between states deterred war to a greater extent then the high tension that nuclear weapons bring to international politics(Dunne.2001, p.173). A main argument that nuclear weapons are beneficial to the world is that they act as deterrence to states that may be tempted to resort to war in order to solve their differences, this can be seen because there has not been a world war in the past sixty years despite Two Hegemonic super powers rising with opposing ideologies and an array of disputes (Cuba, Korea, Afghanistan, Berlin). Perhaps this is out of fear of Mutually Assured Destruction (where the only reason preventing one power from attacking with a nuclear device is the knowledge that the attacked power will hit back with nuclear missiles before it is destroyed- destroying both sides) ...read more.

war with since every military action would risk the end of the world, thus creating an end to war on the basis of M.A.D .The Gawain Williams page four (4/7) notion of sharing nuclear technology was even considered by America after 1945 (Howlett.2001, p.428) but the ensuring Cold war showed the mass availability of nuclear weapons to be a very dangerous idea since the more countries that have the ability to strike with nuclear weapons means that there is more of a chance of an irrational leader gaining this power and starting a nuclear war. Throughout History there has been a strong argument for nuclear weapons to be used as an instrument of deterrence with the American president Eisenhower stating "atoms for peace" (Howlett.2001,p.430). However, there is a strong argument that nuclear weapons are a danger to peace between states. This can be seen throughout various nations such as Switzerland, Holland and Latin American countries that have renounced nuclear weapons and became NWFZ countries (nuclear weapon free zone), and south Africa revealing that in the 1980s it developed six nuclear weapons but destroyed them in 1986 this is a clear statement from some major countries that nuclear weapons can only have a negative effect on the world (Howlett.2001, p.416). This point can be seen again at the NPT (non-proliferation of nuclear weapons) treaty review in 2000 where five of the seven NWS (nuclear weapon states) (including American and Russia) stated that their eventual goal for their nuclear arsenal is for it to be dismantled completely (Howlett.2001, p.415).This suggests that despite these world powers ...read more.

a nuclear preventative strike in the hope of destroying your enemy before they can strike back, this is a massive danger to peace and means there is a continuous threat to peace (Howlett.2001,p.429). The idea that war is far less likely now because nuclear weapons can be used is clearly incorrect, with America even using nuclear weapons as an excuse to begin a war, by invading Iraq in an attempt to discover banned weapons of mass destruction. This Gawain Williams page seven (7/7) Creates the impression that nuclear weapons can now be the cause of wars instead of acting as deterrence. In conclusion to the question of nuclear weapons being instruments of deterrence or a danger to peace I would have to side with them being a danger to peace since the only use of nuclear weapons resulted in the destruction of two major cities (Hiroshima and Nagasaki) here a major argument can be seen that a deceive with its only use is to kill millions of people can never be anything but a danger to peace. Despite the possibility that M.a.d. brought stability to the cold war, the fact is the cold war is over with America fighting a different type of battle against terrorist where nuclear weaponry has no use and now these weapons should be on there way to decommissioning. However despite nuclear weapons acting as a danger to peace, humans now hold the technology to wipe themselves, this can not be lost or forgotten so we must strive to find ways to lower the risk of a nuclear Armageddon. ...read more.