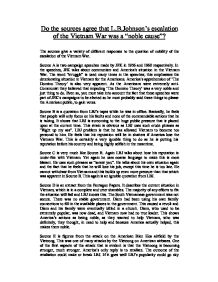 Do the sources agree that L.B.Johnson's escalation of the Vietnam War was a &quot;noble cause&quot;?

Do the sources agree that L.B.Johnson's escalation of the Vietnam War was a "noble cause"? The sources give a variety of different responses to the question of nobility of the escalation of the Vietnam War. Source A is two campaign speeches made by JFK in 1956 and 1960 respectively. In the speeches, JFK talks about communism and America's situation in the Vietnam War. The word "struggle" is used many times in the speeches; this emphasises the deteriorating situation in Vietnam for the Americans. America's apprehension of 'The Domino Theory' is also very apparent. As the Americans were extremely anti-Communist they believed that impeding 'The Domino Theory' was a very noble and just thing to do. Even so, you must take into account the fact that these speeches were part of JFK's campaigns to be elected so he most probably said these things to please the American public, to gain votes. ...read more.

He talks about his own situation again and the fact that he feels that he will lose his job, except this time he is too late. He cannot withdraw from Vietnam and this builds up even more pressure than that which was apparent in Source B. This again is an ignoble quotation from LBJ. Source D is an extract from the Pentagon Papers. It describes the current situation in Vietnam, which is in a complete and utter shambles. The majority of any efforts to fix the situation will fail and LBJ knows this. The South Vietnamese government was not secure. There was no stable government. Diem had been using his own family connections to fill in the available places in the government. This caused a revolt and Diem and his family were eventually killed in a church. Diem, who used to be extremely popular, was now dead, and Vietnam now had no true leader. ...read more.

There is a lot of suspicion surrounding the Gulf of Tonkin Incident. There are many conspiracy theories about this incident as its repercussions started America's involvement in the Vietnam War. The boat, which was supposedly hit by the North Vietnamese only, had one bullet wound on it. Accompanying planes did not even see any attackers but, still, this incident caused a treaty to be created which gave LBJ the excuse he needed to go to war. The treaty meant that the decisions were out of LBJ's hands. I think that this source is another mixture of nobility and dishonourable content. Its nobility comes from the fact that America is now fighting for the freedom of the South Vietnamese. The shamefulness comes from that fact that the whole Gulf of Tonkin incident is under a cloud of uncertainties. All the sources depict a different reason for the escalation of the war being noble or ignoble. But, the majority of the sources do portray a view of nobility over the escalation of the war. Word Count = 791 ...read more.