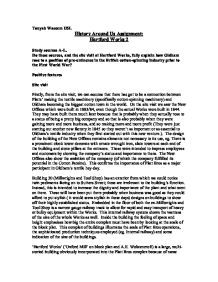 Do these sources, and the site visit at Hartford Works, fully explain how Oldham rose to a position of pre-eminence in the British cotton-spinning industry prior to the First World War?

Touyab Waseem U5L History Around Us Assignment: Hartford Works 2 Study sources A-L. Do these sources, and the site visit at Hartford Works, fully explain how Oldham rose to a position of pre-eminence in the British cotton-spinning industry prior to the First World War? Positive features Site visit Firstly, from the site visit, we can assume that there has got to be a connection between Platts' making the textile machinery (specifically cotton-spinning machinery) and Oldham becoming the biggest cotton town in the world. On the site visit we saw the New Offices which were built in 1883/84, even though the actual Works were built in 1844. They may have built them much later because that is probably when they actually rose to a status of being a pretty big company and so that is also probably when they were gaining more and more business, and so making more and more profit (They were just starting out another new factory in 1845 so they weren't as important or as essential to Oldham's textile industry when they first started out with this new venture.). The design of the building of the New Offices contains elements not necessary to its use, eg. There is a prominent clock tower decorate with ornate wrought iron, slate towers at each end of the building and stone pillars at the entrance. These were intended to impress employees and customers by showing the company's status and importance to them. The New Offices also show the ambition of the company (of which the company fulfilled its potential in the Cotton Famine). This confirms the importance of Platt Bros as a major participant in Oldham's textile hey-day. Building 30 (Millwrights and Tool Shop) has an exterior from which we could notice twin pediments facing on to Suthers Street; these are irrelevant to the building's function. Instead, this is intended to increase the dignity and importance of the plant and what went on there. ...read more.

Source J also suggests that a lot of money was spent on outdoor relief so if the town is spending money on cleaning itself, how can it afford to set up businesses such as cotton mills and machinery-making companies? This suggests that the town would go anywhere other than up in terms of status in the cotton-spinning industry. Additional evidence As the positive features are not enough to tell us why Oldham rose to a position of pre-eminence we need to see additional evidence to prove Oldham rose to a position of pre-eminence in the cotton-spinning industry prior to the First World War. This additional evidence has to not be limited by the deficiencies mentioned above and it must also be evidence which is Oldham specific therefore it could suggest why Oldham rose to a status of pre-eminence when it did. It could do this because the Oldham specific factors would not be valid for any other cotton-spinning towns because Oldham would be the only town to have the factors so it would suggest why the status of Oldham rose above every other town in the cotton-spinning industry. The main reason for Oldham's rise to pre-eminence was that the companies of Platts and Asa Lees were established in Oldham. D.A.Farnie states in his hypothesis the importance of Platt Bros in helping Oldham achieve pre-eminence prior to the First World War. "For the manufacture of yarn Oldham acquired one incalculable advantage over the other towns...the presence of the firm of Platt Bros." "During the crisis of the Cotton Famine Oldham under the guidance of John Platt (1817-72) became the first town in Lancashire to use Indian cotton in place of American staple." During the great civil war between the northern and southern states of the USA, American cotton could not be imported in Britain so the cotton industry needed to use another type of cotton. ...read more.

This method which produced a chain of certain interdependence proved to be a success in making Oldham rise to pre-eminence in the cotton-industry. All this was due to the fact that the system of 'spacing and turning', which was unique to Oldham, actually worked very well. The last Oldham-specific factor was the concept of success breeding success. This was when this hard-working successful generation of Oldham were breeding even more success as the next generation produced people whose whole lives may have been dominated by the cotton industry because their parents may have talked to them about it when they would have been workers or involved in the industry in any other way. "They employed and bred a superior class of operatives...who worked better and harder...." "The competitive capacity of the limiteds was strengthened by their hard-driving managers, by their sharp- minded salesmen and by their dividend-hungry shareholders." As more money was being made by the more harder working generation Oldham's status in the cotton-spinning industry to that of pre-eminence. This factor and the four other factors in this additional evidence provide reasons for Oldham's rise to pre-eminence because they are all Oldham's specific i.e. they are unique to Oldham. Conclusion Following my investigation, I do not think that sources A-L and the site visit fully explained how Oldham rose to a position of pre-eminence prior to the First World War. This is because not enough of them were actually Oldham specific so they didn't tell us why Oldham rose above all other cotton towns in the cotton industry and the time periods in which they are recorded were not suitable for the investigation. Also, there was some counter-evidence in some f the material. To tell us why Oldham rose to pre-eminence we needed additional evidence and this was provided by Eastham and mainly D.A.Farnie. This additional evidence fully explained why Oldham rose to a position of pre-eminence in the cotton-spinning industry prior to the First World War. ...read more.