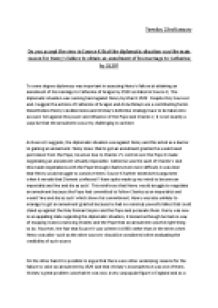 Do you accept the view in Source K that the diplomatic situation was the main reason for Henry's failure to obtain an annulment of his marriage to Catherine by 1529?

﻿Tuesday 22nd January Do you accept the view in Source K that the diplomatic situation was the main reason for Henry's failure to obtain an annulment of his marriage to Catherine by 1529? To some degree diplomacy was important in assessing Henry's failure at attaining an annulment of his marriage to Catherine of Aragon by 1529 as stated in Source K, 'the diplomatic situation was running hard against Henry by March 1529'. Despite this, Sources I and J suggest the actions of Catherine of Aragon and Anne Boleyn are a contributing factor. Nevertheless Henry's stubbornness and Wolsey's defective strategy have to be taken into account. Set against the power and influence of the Pope and Charles V, it is not exactly a surprise that the annulment was very challenging to achieve. As Source K suggests, the diplomatic situation was against Henry and this acted as a barrier to gaining an annulment. Henry knew that to get an annulment granted he would need permission from the Pope, however due to Charles V?s control over the Pope it made negotiating an annulment virtually impossible. ...read more.

The Blackfriars court proceedings lasted until July 1529, with no resolution of the problem. Despite the case being heard in England, Campeggio used papal jurisdiction to adjourn proceedings for the Italian summer. Source J reiterates just how difficult it was for Wolsey, "Wolsey uses all his means to bring the E,peror into hatred, and Francis into favour; but it is hard work to fight against nature." As stated in a letter written by the French Ambassador in December 1528. Another factor to consider when analysing the reasons why Henry failed to attain an annulment was the persistent efforts by Catherine to try and keep the marriage together for the sake of their daughter Mary and Henry's pathetic excuse as to why the marriage was unlawful. Henry?s argument was that a passage of the bible called Leviticus stated "If a man shall take his brother's wife, it is an unclean thing...they shall be childless". Henry believed that this meant he should not have been allowed to marry Catherine in the first place and that his marriage with Catherine was unlawful because he ?took? his brother?s wife. ...read more.

The King's infatuation with Anne Boleyn further gave claim to the idea that Catherine was being cast aside by Henry in favour of younger women. This point is clarified in Source I, "Anne Boleyn is at last come hither, and the King has lodged her in a very fine lodging, which he prepared for her himself. Greater attention is now paid to her every day than has been to the Queen for a long time." The people of the kingdom liked Catherine and so had not grown accustomed to Anne Boleyn. In conclusion it is undeniable that the diplomatic situation played a large role in Henry?s failure to gain an annulment by 1529. However it is also important to avoid downplaying the role of other factors such as Wolsey?s ineffectiveness in sealing a quick divorce, Henry?s potentially weak excuse and Catherine?s commitment to remaining in a marriage. If Wolsey had been quicker and had Catherine not been so stubborn, it could be argued that the diplomatic situation wouldn?t have mattered as much. However there is little doubt that once the diplomatic situation was in place it was the main reason for Henry?s failure to secure an annulment. ...read more.