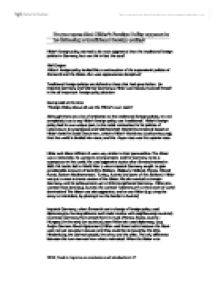 The only difference between the two menwas how where motivated. When the Kaiser was motivated by his envy of Great Britain's Empire and navy, he wanted this status for Germany. Hitler was motivated by his racial policies. There were also similarities between the foreign policy of Weimar Germany and Hitler's Foreign Policy. Weimar Germany had began to revise the Treaty of Versailles, and Stresemann had began the reduction in the reparations payments after World War One. Stresemann had agreed to the Dawes Plan, in 1924, which agreed that reparation's payment's should begin at 1 billion marks for the first year and should rise over a period of four years to 2.5 billion marks per year although this did not work and so was soon substituted by the Young Plan. In this it was agreed that reparations payments would be paid in one unconditional sum (one third of the total) and then a postponed part (the remainder) Br�ning, a member of Weimar Government ended reparations payments in 1932, just before the Nazis came to power. ...read more.

He also signed the Anglo-German Naval agreement, allowing Germany to have 35% of the number of members in the British Navy, in its own Navy. This annoyed France and led to the break-up of the Stresa Front. Hitler also wanted to expand to the east, to gain more 'Lebensraum' and to unite all Germans in the one country, which Stresemann had also wanted to do. Stresemann wanted to help all the Germans who had been forced, by the Treaty of Versailles to live in other countries. Hitler had targeted Czechoslovakia, Poland and Russia to name a few countries in the east. Hitler wanted to expand Germany to be not only a huge superpower but be in domination of the entire world for 1000 years in the 'one thousand year Reich'. Some of the people who were members of the Weimar Government continued into the Nazi Government. Von Neurath, who had been foreign minister, during Weimar Germany, continued on until 1938, under the Nazi Government. Blomberg and Fritsch, both served under the Weimar and the Nazi Government until 1938. Von Papen(who had been Chancellor from 1932-33) after Hitler became Chancellor was part on the Nazi Government post 1933. 29/30, Need to improve on conclusion and introduction LY! ...read more.