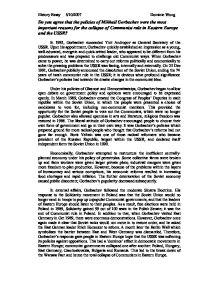 Do you agree that the policies of Mikhail Gorbachev were the most important reasons for the collapse of Communist rule in Eastern Europe and the USSR?

Do you agree that the policies of Mikhail Gorbachev were the most important reasons for the collapse of Communist rule in Eastern Europe and the USSR? In 1985, Gorbachev succeeded Yuri Andropov as General Secretary of the USSR. Upon his appointment, Gorbachev quickly established an impression as a young, well-educated, energetic and quick-witted leader, who appeared to be different from his predecessors and was prepared to challenge old Communist ways. When Gorbachev came to power, he was determined to carry out reforms politically and economically to solve the pressing problems the USSR was facing, internally and externally. On 25 Dec 1991, Gorbachev publicly announced the dissolution of the Soviet Union, ending the 74 years of harsh communist rule in the USSR; it is obvious what profound significance Gorbachev's policies had towards the drastic changes in the communist bloc. Under his policies of Glasnost and Democratizatsiya, Gorbachev began to allow open debate on government policy and opinions were encouraged to be expressed openly. In March 1989, Gorbachev created the Congress of Peoples' Deputies in each republic within the Soviet Union, in which the people were presented a choice of candidates to vote for, including non-communist members. ...read more.

In external affairs, Gorbachev followed the moderate Sinatra Doctrine. His response to the Solidarity movement in Poland was that the Soviet Union would no longer send in troops to pop up unpopular Communist governments, and that the leaders of Eastern Europe should listen to their peoples. As a result, free elections were held in Poland in 1989, Solidarity gained 99 out of 100 seats in the Polish Senate; it was the end of Communist rule in Poland. In addition to that, when Gorbachev visited East Germany in Oct 1989, there were enormous demonstrations. However, Gorbachev once again made it clear that Soviet tanks would not move in to restore order, and he asked the East German leader Erich Honecker to reform. A month later the Berlin Wall which symbolises the barrier between East and West Germany was dismantled. Therefore, Gorbachev's response gave people in Eastern Europe hope that the USSR was softening its policies against oppositions. This had a 'dominos' effect in democratic movements in Eastern Europe; communist governments collapsed one after another: Poland, Hungary, East Germany, Czechoslovakia, Bulgaria and Romania. ...read more.

He was still a loyal believer in Communism. His policies were aimed to achieve the purest and final stage of Communism, so that the Communist rule could be strengthened. Despite his policies, it was the things happened beyond his control which led to the collapse of Communism. The Communist rule collapsed from the outside. The Solidarity movement in Poland triggered the events that happened in Eastern Europe. Soviet-controlled countries declared independence one after another in a shockingly fast pace. By the end of 1989, it was obvious that the 'Iron Curtain' had been lifted; the Soviet empire ceased to exist. At his home country, when Boris Yeltsin declared the Russian Republic to be independent, there was no longer anything Gorbachev could do to save the situation. In conclusion, the Soviet Union was clearly doomed in the 1980s. Economic problems were apparent, living standards were far below that in the West, and it had clearly lost the Arms Race. The Soviet people had had enough what Communism had brought them. Had Gorbachev done nothing, somebody would have acted and the USSR would have eventually collapsed because of its own impossibility. ?? ?? ?? ?? History Essay 5/10/2007 Dominic Wong ...read more.