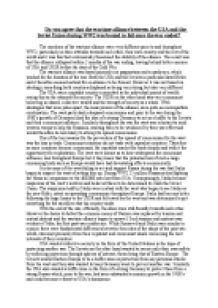 Do you agree that the wartime alliance between the USA and the Soviet Union during WW2 was bound to fail once the war ended?

﻿Do you agree that the wartime alliance between the USA and the Soviet Union during WW2 was bound to fail once the war ended? The members of the wartime alliance were very different prior to and throughout WW2, particularly in their attitudes towards each other, their own country and the rest of the world and it was this that continuously threatened the stability of the alliance. The result was that the alliance collapsed within 2 months of the war ending, leaving behind bitter enemies of USA and USSR before the start of the Cold War. The wartime alliance was based primarily on pragmatism and expediency, which worked for the duration of the war. Both the USA and the Soviets in particular hated Hitler and it therefore seemed natural for an alliance to be formed. However it was not based on ideology; something both countries displayed as being very strong but also very different. The USA was a capitalist country committed to the individual pursuit of wealth seeing this as the rationale for society. The USSR on the other hand was very communist believing in shared, collective wealth and the strength of society as a whole. ...read more.

Similarly the USA also wanted a buffer zone in the form of a strong Germany to protect them from a strong Russia which, prior to the war, had seen substantial economic growth in the 1930?s and could become a threat to USA?s dominance. The USA wanted open markets to maximise their trading opportunities and increase and maintain their profit levels. Whilst this would benefit everyone it would be particularly beneficial to the US following their economic dominance throughout the 1920?s. Of course the Soviets, being communist wanted a closed trading system whereby they only trade with other communist countries, blocking exploitative advances from the west. Another element to the breakup of the alliance is that before the war, neither the USA nor USSR wanted world power, despite economic dominance and economic growth respectively. After WW2 with the responsibilities of reshaping the post war world, the possibilities towards changing the world favourably for their country both economically and politically became more apparent. There was a power vacuum which both the USA and Russia had the potential to fill, causing tensions and even aggression during the post war conferences with little room for compromise from either side of the alliance. ...read more.

To conclude, the wartime alliance was never going to work beyond the duration of the war. It was created for the war and therefore not designed for any longer term existence. The ideologies and principles of the USA and USSR were so far removed that they struggled to find any common ground, thus creating a constant tension and mutual suspicion which was underlying cause of the breakup of the alliance. However, while both powers were partly to blame, the aggression and insensitivity of the USA towards the USSR is ultimately the reason for the failure of the alliance. The USSR was in a much worse situation at the end of the war than the USA because of the USA?s lack of action in the war in comparison to that of the USSR. The USA should have been prepared to compromise on behalf of the efforts the Soviets made during the war and yet they were so fearful of communism that they treated the USSR with a lot of suspicion. Less suspicion and more support for the broken USSR might have lessened Stalin?s doubt about the motives of the USA and actually helped the wartime alliance to continue for longer. Ultimately, the wartime alliance was just that, created and lasting for purely wartime. ...read more.