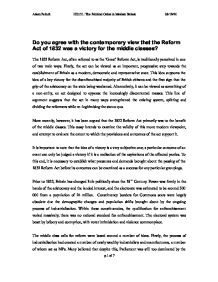 Do you agree with the contemporary view that the Reform Act of 1832 was a victory for the middle classes?

Do you agree with the contemporary view that the Reform Act of 1832 was a victory for the middle classes? The 1832 Reform Act, often referred to as the 'Great' Reform Act, is traditionally perceived in one of two main ways. Firstly, the act can be viewed as an important, progressive step towards the establishment of Britain as a modern, democratic and representative state. This idea supports the idea of a key victory for the disenfranchised majority of British citizens and the first sign that the grip of the aristocracy on the state being weakened. Alternatively, it can be viewed as something of a non-entity, an act designed to appease the increasingly discontented masses. This line of argument suggests that the act in many ways strengthened the existing system, splitting and dividing the reformers while re-legitimising the status quo. More recently, however, it has been argued that the 1832 Reform Act primarily was to the benefit of the middle classes. This essay intends to examine the validity of this more modern viewpoint, and attempt to evaluate the extent to which the provisions and outcomes of the act support it. It is important to note that the idea of a victory is a very subjective one; a particular outcome of an event can only be judged a victory if it is a realisation of the aspirations of the affected parties. To this end, it is necessary to establish what pressures and demands brought about the passing of the 1832 Reform Act before its outcomes can be examined as a success for any particular groupings. ...read more.

The disequilibrium of interests would remain unresolved until the next Reform Act of 1867. An area that the 1832 Reform Act is usually praised for, the reform of the enfranchisement qualification, could also be viewed as a defeat for the middle classes. Under the original terms of the Act, there was a requirement for voters in the boroughs to own or rent property worth �10 per year, effectively excluding the majority of industrial workers from the electorate. County constituencies remaining contested by largely locally determined qualified voters, however, were subject to one key change, undoubtedly to the benefit of the landed interests. This section of the act, the Chandos clause, granted a vote to tenant farmers whom paid rent of �50 or more per year. It was thought that this group would be vulnerable to pressure brought about by their landlords, strengthening their position in the parliamentary system. It could therefore be suggested that reform weakened the position of the middle classes by disproportionately enfranchising agricultural voters over industrial ones. However, Gash highlights the fact that even before the Reform Act, tenant farmers could become enfranchised with little difficulty, and it would be absurd to suggest that the later influence of protectionist, agriculturally based MPs on this clause alone.7 If this is indeed the case, it would imply that while the 1832 Act was by no means a victory in this respect, it could not be deemed a defeat either. Another way by which the Reform Bill can be seen as a victory for the middle classes rests on the contemplation of what an alternative bill have contained, or indeed, what may have happened if no Bill had been passed at all. ...read more.

Parliament continued to be overwhelmingly dominated by aristocrats. In its purest form therefore, the act cannot be seen to be a middle class victory. The question as to whether the 1832 Reform Act was a victory for the middle classes is really a question of scale. The middle classes did gain some political benefits from the act, although these were quite obviously less that they aspired to. Violent revolution did not take place, and I believe the act must take some credit for this, although there is no agreement on this issue. I am inclined to believe the significance of the act lay more in the precedents it set and the tacit admission of the increasing significance of the middle classes than in its actual content. The act was intended to be a means of preserving the power and position of the aristocracy rather than a deliberate attempt to redefine the political spectrum. Although the middle classes made some gains, I personally view the act as victory primarily for the aristocracy. The true middle class victory came later. Notes 1) Norman Lowe, Modern British History (London: Macmillan, 1998), p.48. 2) D. Moore, "Concession or cure: the sociological premises of the First Reform Act," Historical Journal, (1966), p.39. 3) Michael Bentley, Politics Without Democracy (Oxford: Basil Blackwell, 1985), p.87. 4) W.D. Rubenstein, Britain's Century (London: Arnold, 1998), p.45 5) Norman Gash, Politics in the Age of Peel ( London: Longmans Green and Co, 1969), p.22. 6) Rubenstein, Britains Century, p.32. 7) Norman Gash, Aristocracy and People (London: Arnold, 1992), p.149. 8) Gash, Aristocracy, p.150 9) W.D. Rubenstein, "The end of Old Corruption in Britain" Past and Present, (1983), p.80. ...read more.