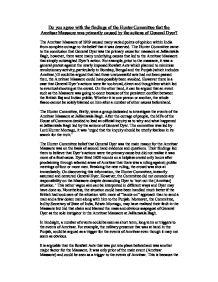 Do you agree with the findings of the Hunter Committee that the Amritsar Massacre was primarily caused by the actions of General Dyer?

Do you agree with the findings of the Hunter Committee that the Amritsar Massacre was primarily caused by the actions of General Dyer? The Amritsar Massacre of 1919 caused many varied points of opinion within India from complete outrage to the belief that it was deserved. The Hunter Committee came to the conclusion that General Dyer was the primary cause for massacre at Jallianwala Bagh, however, there were many underlying causes that led to the Amritsar Massacre that simply outweighed Dyer's action. For example, prior to the massacre, it was a general protest against the newly imposed Rowlatt Acts which planned to minimise revolutionary activity, particularly in Bombay, Bengal and the Punjab (which includes Amritsar.) It could be argued that had these unsuccessful acts had not been passed then, the Amritsar Massacre could have possibly been avoided. However there is a case that General Dyer's actions were far too brutal, direct and thoughtless which led to eventual shooting at the crowd. On the other hand, it can be argued that an event such as the Massacre was going to occur because of the persistent conflict between the British Raj and Indian public. ...read more.

In response, the Indians mutinied and the British unleashed a brutal answer. Many convicted Indian mutinied soldiers were to lick blood wounds of their victims and were also hanged. The harshness of the consequences showed how brutal the government in response to the minor Indian protest. And the stark similarity of Mutiny and the Amritsar Massacre shows how the British responded to Indian protest. Moreover, because the responses was very similar it cannot be possible to blame the Massacre on one person; General Dyer. This is because it clearly shows what the British mentality was and the ongoing tussle between the Raj and Indian protestors led to one outcome: brutal British response. Moreover to the fact that the primary cause for the Amritsar Massacre was not General Dyer, was the number of short-term events that led up to the events of Jallianwala Bagh. For example, the effects of World War One that India had to endure post-war. The post war recession and post war communism scare evidently led to social unrest within India. The widespread social unrest and fear led to many active Indians to voice their concerns and protest about the current situation of the country. ...read more.

The number of events that occurred before the Amritsar Massacre was largely down to the ineptitude of the British government and their poor handling of India. There was a little bit of pressure with 'hartals' commonplace and the British panicked and installed a law which more or less told Indians to 'keep quiet or prison.' Instead of improving relations with the Indian public and the Raj, they gave out harsh and severe punishments to offenders, for example, licking blood wounds of victims. Raising taxes while Indians volunteered for fight for the Empire did not go down well with Indians. Not giving good enough reward for their endeavours, installing Rowlatt Acts and failure of monsoons all added up to the misery and 'anti-British feeling.' The Amritsar Massacre was the final piece as it angered Indians even more and buckling under the pressure, the British government squarely put the blame on General Dyer. Failing to realise their own failure beforehand, Dyer actions made him the scapegoat. Therefore, I do not agree with the findings of the Hunter Committee that General Dyer was the primary cause of the Amritsar Massacre, however, I do believe he was the final cause. The British government failure to solve the ongoing problems within India beforehand, makes them the primary cause for the events of Jallianwala Bagh in 1919; the Amritsar Massacre. ...read more.