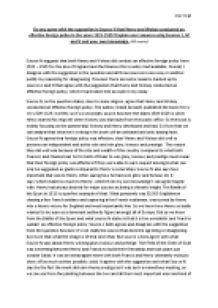 Do you agree with the suggestion in Source N that Henry and Wolsey conducted an effective foreign policy in the years 1515-1525? Explain your answers using Sources L, M and N and your own knowledge.

But source L does agree with what Source N says about Henry winning glory honour and prestige. The Field of the Cloth of Gold was a meeting between Henry and Francis to build their friendship and took place just outside Calais. It was an extravagant event with both Francis and Henry ultimately trying to show off as much as they possibly could. It agrees with the suggestion and what Source N says by the fact the event did earn Henry prestige as it was such a marvellous meeting, as we can see from the painting between the two and all their most important men and kind of put him on the map that was Europe which was dominated by mostly Charles and Francis. It was also good because it was a lot cheaper than war so that benefited the country and also contributed to Wolsey and Henry attempting to maintain an effective foreign policy. However sources L, M and N all disagree with the suggestion the foreign policy was effective. Despite source L to some points agreeing that it was effective; it also contradicts its purpose to increase the effectiveness of the foreign policy as actually it didn?t do exactly what Henry and Wolsey had hoped. ...read more.

This contemplates how effective the foreign policy conducted by Henry and Wolsey was. If there?s an uproar from the public and even the Dukes of Norfolk and Suffolk are asking ?for the King?s highness to call his council, to debate and determine what is best to be done? because of Henry?s determination to be so powerful amongst the rest of Europe yet not be able to control what is going on in the most important country to him of all, then he and Wolsey cannot conduct an effective foreign policy. Overall, from the sources and my own knowledge I have come to learn that I disagree with the suggestion that Henry and Wolsey conducted an effective foreign policy between 1515 and 1525. Despite the attempts to become a leading authority in foreign affairs with Francis and Charles V, such as the Field of the Cloth of Gold, it was hugely unrealistic for the size and wealth of the country. However to some extent, Henry and Wolsey did earn prestige amongst some of Europe, they ?failed to bring great gains to the country.? And the effectiveness of the foreign policy was poor because to the simplicity of his policy was that Henry wanted much more authority and dominance in Europe than was possible. ...read more.