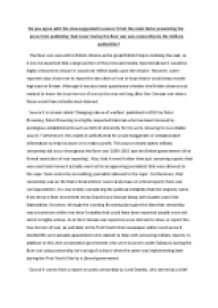 Do you agree with the view suggested in source 5 that the main factor preventing the press from publishing bad news during the Boer war was censorship by the military authorities?

﻿Do you agree with the view suggested in source 5 that the main factor preventing the press from publishing ?bad news? during the Boer war was censorship by the military authorities? The Boer war was sold to British citizens as the great British Empire civilizing the east, so it is to be expected that a large portion of the press and media reported about it would be highly censored to ensure it would not reflect badly upon the empire. However, some reporters also chose not to report the atrocities of war in hope that it would keep morale high back in Britain. Although it has also been questioned whether the British citizens truly wanted to know the true horrors of war as this was not long after the Crimean war where these would have actually been banned. Source 5 is a book called ?Changing nature of warfare? published in 2002 by Peter Browning. Peter Browning is a highly respected historian who has been honored by prestigious establishments such as Oxford University for his work, showing he is a reliable source. ...read more.

However, due to his position as a chief military censor the reliability of the source could be questioned as it would be unlikely he would write about censorship or the behaviour of war correspondents in a negative light as it would reflect badly upon him, making it seem like he was unfit for the position. This can be seen ?the last thought the correspondents have is in any way to go against military regulations?, showing that the military censors were in full control of the situation. Although, correspondents may have chose not to publish ?anything detrimental? due to more informal relationships between themselves and military commanders rather than censorship. This may also be why Lord Stanley showed the correspondents is a positive light too ?the idea of the vast majority of war correspondents is to conform to every reasonable restriction?, as he didn?t wish to be harsh on men he had become friends with. Also, many of the commanding officers were also correspondents themselves such as Winston Churchill or Lord Rosslyn both sent by the Daily Mail. ...read more.

nature shows that censorship wasn?t the reason ?bad news? didn?t make the press it was more due to the public distaste for it. The impression source 6 gives is that the British public preferred remaining ?distant? to the horrors of war and favored censorship a sit kept their morale high ?enjoyed their war through music hall songs?. This impression isn?t shared by source 5 regardless of the fact they were both published nearly a century after the war. This lack of a universal conclusion on the truth shows how even today it is a complex issue that hasn?t been decided. In conclusion, whilst it appears that the military censorship that was undoubtedly present in the Boer war as it has been in nearly every war since played a significant role in the lack of ?bad news? reported by the press it can?t be seen to be the main factor. As informal relationships played an important part in what was reported back to Britain, alongside the public?s aversion to having ?bad news? published in mainstream newspaper as the was ?physically distant? this lack of knowledge allowed it to also remain mentally distant to them. ...read more.