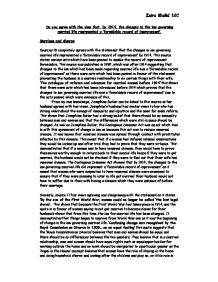 Do you agree with the view that, by 1914, the changes to the law governing married life represented a formidable record of improvement.

This case enabled the marital law to be introduced which prevented wife-battering and marital rape as this law specified that a husband did not have complete control over his wife showing that changes to the law governing married life had started to take place after the introduction of this law. Custody of children Source 16 is a source that completely disagrees with the statement to the changing of law governing married life. 'No legal right to a voice' this shows that a woman has no right to say what they want or how they want their life to run. This agrees with the fact that women should remain silent and their husbands should make their decisions as they are head of the family. This quote refers to the 'Angel in the House' concept that women have no say in politics and should remain within the home to look after the children and do household chores without any relation to politics in the outside world. This source shows that by 1914, there were no changes to the law in governing married life which shows that the rules and regulations remained the same and there were no changes which would aid women to go outside of their home and take part in things which were only addressed to men such as work and the equality between the sexes. ...read more.