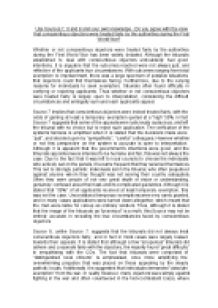 The fact that tribunals were comprised of ?distinguished local citizens? is emphasised, once more amplifying the overwhelming prejudice that was placed on those appealing by the deeply patriotic locals. Additionally it is suggested that individuals demanded ?absolute exemption? from the war. In reality however, many objectors were simply against fighting in the war and often volunteered in the Non-Combatant Corps, where they were able to undertake more administrative duties, such as ambulance driving, stretcher bearing or merely cleaning. For instance the largest bloc of conscientious objectors were the christadelphians, who took a literal reading of the bible, and refused to fight, yet were prepared to do other kinds of war related work. Furthermore Source 8 highlights the distinct lack of understanding between the tribunals, and absolutists who sought to take no part in the war, directly or indirectly. Not only did they rarely grant unconditional exemption, they also often allocated absolutists to non-combatant duties that such individuals were strongly against. In fact the somewhat harsh treatment of absolutists has been widely documented. During the course of the war it is known that, forty-one absolutists were transferred to France, where they were considered to be on active service and could thus be sentenced to death for refusing orders. ...read more.

In fact, before obtaining a mere temporary objection, conscientious objectors had to first bypass the presence of an army-selected member, who attended every hearing with the right to cross-examine each applicant. These 'military representatives' seemed to have a common aim, in attempting to get as many men as possible into the army to fill the void left by the dead. At the time this view was considered appropriate, and with British Army losses standing at 528,227 by the end of 1915, such a position is understandable. However, to the objectors, the severe lacking of volunteers meant that they were often treated unjustly, not out of personal preference, but out of sheer necessity to maintain adequate numbers on the front line. In conclusion, whilst in some cases non-combatant corps and somewhat lenient, ?sympathetic? individuals in tribunals offered a compromise to conscientious objectors, in many cases it is undeniable that such objectors were treated unfairly. Particularly when seeking ?absolute exemption? it seems prejudice was shown towards conscientious objectors, mainly by patriotic locals or scrutinising war officials, aiming to refill the gaps left by dead servicemen on the front line. Thus to a considerable extent I disagree with the view that conscientious objectors were treated fairly throughout the First World War. ...read more.