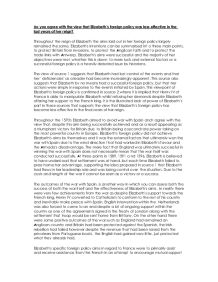 Do you agree with the view that Elizabeth(TM)s foreign policy was less effective in the last years of her reign?

On the other hand however, as the war was so costly to the British monarchy, it can be viewed as a success of Elizabeth's, in that she was able to cut back on some of the costs of was, hence reducing the national financial pressure. Elizabeth did have some significant successes in the Netherlands including the role the British troops played in enabling the Dutch to capture some cities in the Netherlands from the Spanish. This was a significant success for Elizabeth in 1590 as it was a warning to the Spanish to recognise Elizabeth's power s well as being a step towards weakening the Spanish power. It was however the events of 1604 that ultimately undermined the successes of Elizabeth's years, when James I signed the Treaty of London consequently agreeing to discontinue all English intervention in the Netherlands. However despite this, the English trade with Antwerp was protected and it did continue to bring much revenue into England, which as a result meant that Elizabeth's main aim was achieved. Due to the course of events however it seems this was entirely due to a successful foreign policy of Elizabeth's but also to the Treaty of London signed by James I in 1604. In relation to the British victory, defeating the Spanish during the Spanish Armada of 1588, MacCaffrey supports the view that it was not Elizabeth's foreign policy that caused this victory but a combination of luck and external factors. ...read more.

When James I signed the treaty with Spain and France, Elizabeth's efforts became pointless and her aims were forgotten. Having considered the 2 sources and my own knowledge I agree with the view that Elizabeth's foreign policy was less effective in the last years of her reign. It seems the main achievements and successes from 1588 to the end of Elizabeth's reign came as a direct result of either luck or external factors such as the victory in 1588, defeating the Spanish Armada, where it is the wind strength and direction that ultimately wins the war. Another example of this is the English victory in Ireland against the Spanish army who would have been weak and hungry again as a result of the previous bad luck of the winds, the third main success that is greatly due to external factors occurred in the Netherlands where with English support a number of Dutch cities were captured from the Spanish. Although Elizabeth claimed credit for this, and counted it as her success it was really a success of the Dutch and the influence of the English troops was just that, an influence. In conclusion therefore, it is clear to see that in the final years of Elizabeth's reign, the overall effectiveness of her foreign policy appeared to be very little. As a result it was only due to other unforeseen factors that Elizabeth and the entire British monarchy was able to survive the events of 1588 onwards. ...read more.