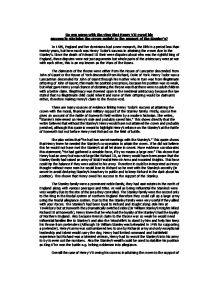 Do you agree with the view that Henry VII owed his crown to the support of the Stanley's?

Do you agree with the view that Henry VII owed his success in attaining the crown mainly to the support of the Stanley's? In 1485, England and her dominions had a new monarch, the fifth in a period less than twenty years, but how much was Henry Tudor's success in attaining the crown due to the Stanley's. Since the death of Edward III their were disputes about who was the rightful king of England, these disputes were not just arguments but whole parts of the aristocracy were at war with each other, this is an era known as the Wars of the Roses. The claimants of the throne were either from the House of Lancaster descended from John of Gaunt or the House of York descended from Richard, Duke of York. Henry Tudor was a Lancastrian descended for John of Gaunt through his mother who in turn was from illegitimate offspring of John of Gaunt, this made his position precarious, because his position was so weak, but what gave Henry a real chance of obtaining the throne was that there were no adult children with a better claim. Illegitimacy was frowned upon in the medieval aristocracy because the law stated that no illegitimate child could inherit and none of their offspring would be claimants either, therefore making Henry's claim to the throne void. ...read more.

Also the Stanley's wealth could be used to stabilize his position as King if he won the battle e.g. bribing noblemen into allegiance. Overall the case of Henry VII owing his success in attaining the crown to the support of the Stanley's is quite strong, they were not just a military force but a force with influence and wealth. So you could say without the support of the Stanley's Henry would have lost his life by either being executed by Richard post-Bosworth or defeated in one on one combat with Richard on the field. It would be very naive to say that there were not other reasons why Henry Tudor attained the crown in 1485, not just due to Stanley support, Henry's support came from other place as well. The French king Charles XIII lent out thousands of French mercenary's to Henry with the hope that Henry would become king and not threaten France with invasion. Although the Stanley's provided an extra 3000 there were more than 3000 given by Charles. Also the Stanley's were not the only aristocrats to support Henry, the Duke of Northumberland and Earl of Westmoreland are other examples. So as the majority of Henry's force was not from the Stanley's then it could be said that he did not completely owe his success to the support of the Stanley's. ...read more.

This shows that Richards action, of summoning men that weren't committed to him to fight, was one cause of Henry Tudor attaining the crown. To conclude, I believe that the Henry Tudor attained the crown of England not just to the support of the Stanley's so I disagree with the question. The Stanley's were the last cause in a long line of causes which brought Henry to the throne and caused Richard to lose it. The Stanley's are looked upon as being the main cause, this may have been true at Bosworth but in the years leading up to it many other causes mounted up against Richard. Henry attained the throne from support from France, exiled Nobles, diehard Lancastrians, the Woodville's and also the Stanley's. It would be wrong to say that the whole reason why Henry Tudor became Henry VII was because Stanley Knights killed Richard, yes , it did end the battle but it did not end the War and secure Henry's position, these political alliances were formed months or years before Bosworth and without those political alliances Henry would not have even reached Bosworth and British history would have been very different to what we know it today. ...read more.