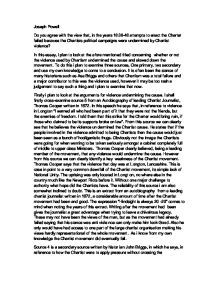 Joseph Powell Do you agree with the view that, in the years 1838-48 attempts to enact the Charter failed because the Chartists political campaigns were undermined by Chartist violence? In this essay, i plan to look at the afore mentioned titled concerning whether or not the violence used by Chartism undermined the cause and slowed down the movement. To do this i plan to examine three sources, One primary, two secondary and use my own knowledge to come to a conclusion. It is often been the stance of many historians such as Asa Briggs and others that Chartism was a total failure and a major contributor to this was the violence used, however it may be too rash a judgement to say such a thing and i plan to examine that now. Firstly i plan to look at the arguments for violence undermining the cause. I shall firstly cross-examine source 5 from an Autobiography of leading Chartist Journalist, Thomas Cooper written in 1872. In this speech he says that, in reference to violence in Longton "I warned all who had been part of it that they were not the friends, but the enemies of freedom. ...read more.

Also he only would have had access to one part of the large chartist organisation making his views hardly representational of the whole movement. As i know from my own knowledge the Chartist movement did eventually fail. Source 4 is a secondary source written by historian John Briggs, in which he says, in reference to how the Chartist were to apply pressure without crossing the moral/physical force line "If that happened, the immediate consequence was the loss of respectable support and a gift to the government of perfect justification for repressive action". Although chartism was good at gaining public support, clearly shown by the 3 million signatures for the second petition, it poor at channelling this support into a revolutionary movement. As a result the violent movements were soon as sporadic and were not taken seriously at all by the government. As a result all Chartist violence was easily quashed, for example the Newport Rising amongst others. Under the Command of General Napier and rushed all over the country in extreme speed by the new railway the Chartists had alot to combat. ...read more.

The huge variety of such splinter groups once again shows the lack of unity the Chartists faced. The second of these groups not even advocating something note even included on the People's Charter. To carry on the argument that violence wasn't the biggest factor i know from my own knowledge that after uprising in Birmingham and the North major chartist leaders, such as William Lovett perhaps most notably were arrested and extradited to Australia. This crafty move by the government left the Chartists even more fractured and even more without direction. I conclusion, after examining all the sources and factoring in my own knowledge i think that Chartist violence was the largest contributing factor towards the downfall of Chartism. Had it not been for the splinter violence groups the Chartist may have retained its middle class respectability and shred of support in the upper classes. The fact that the Chartists failed to unify in the violence and uprising also led to its demise. With out unity it was too easy for the army to stamp out the violent groups and after it had turned violent it was too easy for the government to quash Chartism all together with support from the middle classes who saw them as an angry loutish mob. ...read more.