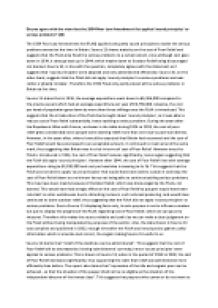 Do you agree with the view that the 1934 Poor Law Amendment Act applied sound principles to serious problems?

The report also claims that ?repression of the idle and vagrant poor can be achieved...so that the situation of the pauper shall not be so eligible as the situation of the independent labourer of the lowest class?. This suggests that paupers who cannot or do not want to work will be put into workhouses, where life is more worse when inside the workhouse, so as to act as a deterrence and encourage more paupers to take up employment and reduce the cost of Poor Relief, thus showing that ?sound principles? were applied to serious problems. Therefore the analysis of the Royal Commission can be seen thoughtful and that they did have a sensible attempt at applying ?sound principles?. However, contradictory to the claims made in the report in Source 14, Outdoor Relief was not banned but only discouraged, thus disagreeing with the claim that idle and vagrant poor were repressed. This is because rather than entering the Workhouses, the paupers can rather support themselves by claiming Outdoor Relief, which in turn would have increased the cost of Poor relief, as shown in Source 13, therefore showing that the PLAA did not apply ?sound principles?. ...read more.

Source 15 is derived from a modern-day textbook written by a modern-day author. Consequently the reliability of the source would increase, as the judgement the author arrives at would have been based on thorough research and dependant on several other sources, and the purpose of this source is not influence the reader to one side, but rather to come to a clear conclusion after looking at both sides, thus also increasing the usefulness as well. To conclude, the PLAA was only able to partly apply ?sound principles? to serious problems. Although the PLAA was able to reduce the cost of Poor Relief, mainly through introducing harsh Workhouse environments, which would stop paupers claiming relief, it was not able to sustain this aim as in 1844 the cost of poor relief increased. This was mainly because Outdoor Relief was discouraged but not banned, therefore led paupers to still continue in claiming Outdoor Relief. However the failure of the PLAA was inevitable as they could not have banned Outdoor Relief since it would have led to public outrage and added to the agricultural unrest may have resulted in an unwanted revolution. Therefore the short-term success of the PLAA was the expectation as with Outdoor Relief, sustaining long-term success would have been near impossible. ...read more.