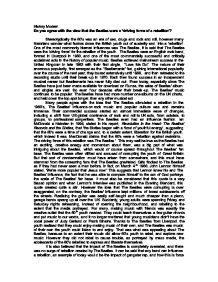 Do you agree with the view that the Beatles were a driving force of a rebellion?

History Modern Do you agree with the view that the Beatles were a 'driving force of a rebellion'? Stereotypically the 60's was an era of sex, drugs and rock and roll, however many historians wonder what factors drove the British youth out of austerity and into a 'rebellion'. One of the most commonly blamed influences was The Beatles, it is said that The Beatles were the 'driving force' for the rebellion of the youth. The Beatles were an English rock band, formed in Liverpool in 1960, and one of the most commercially successful and critically acclaimed acts in the history of popular music. Beatles achieved mainstream success in the United Kingdom in late 1962 with their first single, "Love Me Do". The nature of their enormous popularity, first emerged as the "Beatlemania" fad, gaining international popularity over the course of the next year, they toured extensively until 1966, and then retreated to the recording studio until their break-up in 1970. Each then found success in an independent musical career but Beatlemania has never fully died out. Even today, especially since The Beatles have just been made available for download on iTunes, the sales of Beatles' album and singles are vast. So even four decades after their break-up, The Beatles' music continues to be popular. ...read more.

Realising the guitar was easily self-taught and much cheaper than a piano, garage bands sprang up all over the UK. Suddenly, young adults were spending Friday and Saturday nights rehearsing, instead of roaming the neighbourhood, and rebelling to the extent that the media portrayed. For many, making music with friends was exactly the creative outlet that the 60th youth needed. They could teach themselves a few guitar chords and put music to our words, and it no longer mattered that young musicians didn't have the vocal power of Judy Garland or Frank Sinatra. Thanks to The Beatles from Liverpool, the youth realised that they could enjoy making music of their own, and The Beatles was music of their own the youth could listen to and enjoy. That was what was appealing about The Beatles, because to an extent their music did allow 60's youth to rebel, and explore new music. However they did not rebel to cause trouble, as portrayed by mass media, the adolescents of the 60's rebelled to express and liberate themselves. It is also believed that the impact of The Beatles is completely overrated, and there was no surge of rebellion created by The Beatles. It can be said that any band can influence a rebellion, an example of today would be the impact of gangster rap, and how this is force corrupting the youth of the 21st Century. ...read more.

Overall, the impact of the Beatles was not as exponential as it may seem on the surface. The Beatles were fundamentally nothing more than a bit of fun and a way of letting go. Although the Beatles did have an impact and their influences included: music, fashion, and the way albums were produced. The Beatles introduced a new sound, beat music, which conquered the world of popular music. Their music influenced many other artists. Their hairstyle, the "mop-top" cut became very popular. The suits they wore were adopted by the mod youth cult, and many other bands copied them. The Beatles changed the importance of albums rather than single songs. Young people, especially girls, were very attracted and huge fans to The Beatles. However, the 1960's were a time of change. Our innocence was gone and the music of the 60's was changing to reflect the times, and in 1963"Beatlemania" was here. The Beatles were probably the most influential band of the 60's and today. Music and rock and roll was changed forever. People young and old listen to the Beatles, watch their films, and it never seems "dated". Their sound and attitudes influenced everything that came afterwards, even today. However it could never be said that the Beatles started a rebellion, there is no denying that they were very popular, but this rebellion is myth in the 60's that remains undetermined, but highly unlikely. ...read more.