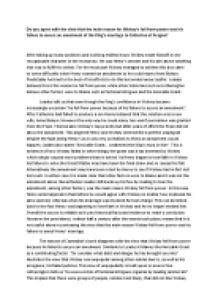 Do you agree with the view that the main reason for Wolseys fall from power was his failure to secure an annulment of the Kings marriage to Catherine of Aragon?

﻿Do you agree with the view that the main reason for Wolsey?s fall from power was his failure to secure an annulment of the King?s marriage to Catherine of Aragon? After taking up many positions and working endless hours Wolsey made himself a very recognisable character in the monarchy. He was Henry?s servant and his aim above anything else was to fulfil his wishes. For the most part Wolsey managed to achieve this but came to some difficultly when Henry wanted an annulment so he could marry Anne Boleyn. Predictably he tried to the best of his efforts to do this but ended unsuccessful. Loades believes this is the reason he fell from power while other historians such as Lotherington believe other factors were to blame such as factional intrigues and the Amicable Grant. Loades tells us that even though the King?s confidence in Wolsey became increasingly uncertain ?he fell from power because of his failure to secure an annulment?. After Catherine had failed to produce a son Henry believed that the solution was a new wife, Anne Boleyn. ...read more.

The extract of Cavendish?s book disagrees with the view that Wolsey fell from power because he failed to secure an annulment. Similarly to Loades it blames the Amicable Grant as a contributing factor. ?Sir consider what debt and danger he has brought you into? illustrates the view that Wolsey was unpopular among other nobles due to, as well as his arrogance, his failed policies. This view of unpopularity is built upon in source four. Lotherington tells us ?he was a victim of factional intrigues organise by leading aristocrats?. This implies that there were groups of people, nobles most likely, that did not like Wolsey and wanted him out of the picture. The Duke of Norfolk, Anne Boleyn?s uncle, is blamed as the culprit who arguably wanted to increase his own influence over Henry. Anne relied on Wolsey for her marriage to Henry VIII and Wolsey?s failure to do this meant Anne and her faction had to get rid of him. Further evidence which supports the view of Anne?s dislike of Wolsey is that he organised the breakup of her previous relationship to Henry Percy. ...read more.

It clearly states ?he did not fall from power because of any aristocratic reaction? which means that Norfolk and other nobles had nothing to do with Wolsey?s fall. While both sides are supported by evidence there is perhaps a link between factional intrigues and the annulment in that they meant Wolsey had no place within the monarchy and his fall was inevitable. His failures which lead to his unpopularity paved the way and the annulment simply pushed him over the edge. To conclude it is made clear in source five that the annulment was a very important reason because it made Henry lose faith in Wolsey. However nothing in history happened for one thing and sources three and four portray the view that it was a combination of foreign policy, the Amicable Grant and factional intrigues which contributed to the fall. If the annulment was Wolsey?s only failure then it is unlikely he would have lost his job so that alone was not why Wolsey fell but rather the final reason to why he fell. Therefore I do not believe there is a main reason to Wolsey?s fall but rather a combination of reasons. ...read more.