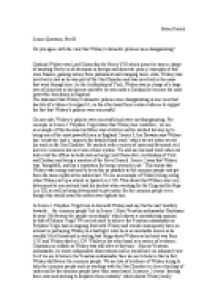 Do you agree with the view that Wolseys domestic policies were disappointing?

﻿Helen French Source Question- Part B Do you agree with the view that Wolsey?s domestic policies were disappointing? Cardinal Wolsey was Lord Chancellor for Henry VIII which meant he was in charge of assisting Henry in all decisions in foreign and domestic policy, examples of this were finance; gaining money from parliament and changing taxes. Also, Wolsey was involved in law as he was part of the Star Chamber and was involved in the cases that went through here. As the Archbishop of York, Wolsey was in charge of a large area of churches in his diocese and after he was made a Cardinal he became the most powerful churchman in England. The statement that Wolsey?s domestic policies were disappointing is one view that has lots of evidence to support it, on the other hand there is also evidence to support the fact that Wolsey?s policies were successful. On one side, Wolsey?s policies were successful and were not disappointing. For example in Source 1 Polydore Virgil states that Wolsey has ?ambition?, we see an example of this because his father was a butcher and he worked his way up to being one of the most powerful men in England. Source 3, Ian Dawson says Wolsey has ?creativity? and a ?capacity for detailed hard work? which we see when we see his work in the Star Chamber. ...read more.

This shows that Wolsey was left to control the country and solve problems alone and had to figure out how to keep the King happy and fund invasions at the same time. On the other hand, some people feel that Wolsey was very disappointing in his domestic policies. For example many people feel that Wolsey was in fact being too ambitious. Source 1 says ?Wolsey with his arrogance? and ?he assumed that he could undertake nearly all the offices of state by himself.? Wolsey was Henry?s Lord Chancellor, as well as a member of the Privy Council and working with the Star Chamber to relieve a long backlog of cases. Whilst some may say that this shows ambition, many, including Polydore Virgil, felt that Wolsey could not be in charge of all of these and run them all as effectively as possible. The nobles also felt that Wolsey was out of his league being so close to the King as he was the son of a butcher and had worked his way up using the church to help him. We see evidence of Wolsey trying to make England and the King seem more powerful than it was when England was at the heart of the treaty of London in 1518 which was a treaty between France and the Holy Roman Empire. ...read more.

Also if Wolsey had a stronger bond with parliament they may have given him more money which would have meant he would never have resorted to the Amicable Grant and wouldn?t have caused a near uprising. I also feel that Wolsey made false promises when he set about trying to stop enclosure as he didn?t really have a plan as to how he was going to stop it and this resulted in the common people suffering. I also feel that Wolsey was a hypocrite because although he said he wanted fairness and wanted the common people to have more rights, he lived in one of the biggest palaces in England at the time, Hampton Court. This shows that Wolsey was very rich and instead of using his money to help the poor people he was building palaces for himself. All in all, I feel that Wolsey?s policies had some strong points and did help the common people to an extent but because of his failures in domestic policy, not standing up and advising the King and trying to stop him spending too much money like he was supposed to as the King?s advisor and glamorous showings of wealth I have to conclude that I agree with the view that Wolsey?s domestic policies were disappointing. ...read more.