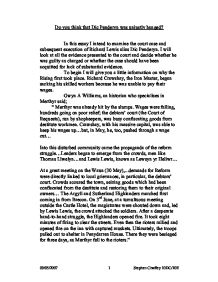 Do you think that Dic Penderyn was unjustly hanged?

Do you think that Dic Penderyn was unjustly hanged? In this essay I intend to examine the court case and subsequent execution of Richard Lewis alias Dic Penderyn. I will look at all the evidence presented to the court and decide whether he was guilty as charged or whether the case should have been acquitted for lack of substantial evidence. To begin I will give you a little information on why the Rising first took place. Richard Crawshay, the Iron Master, began sacking his skilled workers because he was unable to pay their wages. Gwyn A Williams, an historian who specialises in Merthyr said; " Merthyr was already hit by the slumps. Wages were falling, hundreds going on poor relief; the debtors' court (the Court of Requests), run by shopkeepers, was busy confiscating goods from destitute workmen. Crawshay, with his massive capital, was able to keep his wages up...but, in May, he, too, pushed through a wage cut... Into this disturbed community came the propaganda of the reform struggle...Leaders began to emerge from the crowds, men like Thomas Llwelyn...and Lewis Lewis, known as Lewsyn yr Heliwr... At a great meeting on the Waun (30 May),...demands for Reform were directly linked to local grievances, in particular, the debtors' court. Crowds scoured the town, seizing goods which had been confiscated from the destitute and restoring them to their original owners... ...read more.

"The mob made a rush on us and I was wounded...I did not see them laying hands on anyone...Only saw Richard Lewis taking of his hat and cheering but not laying his hands on anyone in the crowd..." Although the evidence comes from the man who was injured this evidence doesn't really prove anything against the defendant. Donald Black says a mob made a rush on him, this means that anyone of those persons present in the mob could have committed the crime, but from the evidence presented by the other witnesses I think there is enough evidence to convict Richard Lewis for the crime which he has been charged, attempted murder. Abbot and Drew give direct evidence as to the guilt of Penderyn whilst Darker and Black place him at the scene. I will now look at the evidence presented to the court by the defence. The first witness called by the defence was Thomas Cottrell, a waiter at the Castle Inn. "I was looking out of an upper window of the Castle Inn when I saw a man, clothed in a coat of a sort of drabbed colour, stab one of the soldiers who I know as Donald Black. I am sure that the colour was not blue or black, so that if Richard Lewis was wearing a blue jacket, it could not have been he who stabbed the soldier." ...read more.

The information about the fight was not told at the hearing but was collected by the Neath Ironmaster, Joseph T Rice, in support of a massive petition for clemency. I think if it had been then James Abbott should not have given evidence against Dic Penderyn. Evan Davies also said "Dic was to die as an example to any would-be-rioters." Even if Dic Penderyn was innocent I think they would have found him guilty to show the public that if there were any more riots they would all be sentenced to death. The evidence collected by J. T. Rice indicates that Abbot and Drew conspired together to get Dic Penderyn convicted. In conclusion I think that there wasn't enough strong, substantial evidence to convict Dic Penderyn of the charge of attempted murder that was brought against him. People of all classes at that time, believed that Dic Penderyn was innocent, even William Crawshay, the ironmaster, who paid for Dic Penderyn's lawyers. People look upon Dic Penderyn's death today as injustice. Later in 1994 The Western Mail printed a confession by Ieuan Parker saying "It was I who wounded the soldier that Dic Penderyn was hanged for" Dic Penderyn will be honoured for his part in the Merthyr Rising and is probably one of Wales's most famous martyrs. I think that there was not enough evidence to convict Dic Penderyn of attempted murder and I think the case should have been acquitted. 09/05/2007 1 Stephen Chaffey 10DC/10E ...read more.