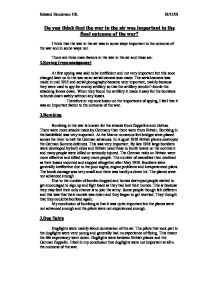 Do you think that the war in the air was important to the final outcome of the war?

Do you think that the war in the air was important to the final outcome of the war? I think that the war in the air was in some ways important to the outcome of the war and in some ways not. There are three main factors in the war in the air and these are: 1.Spying (reconnaissance) At first spying was said to be inefficient and not very important but this soon changed later on in the war as an aerial camera was made. The aerial camera was made in mid 1915 and aerial photography became very important, mainly because they were used to spy for enemy artillery so that the artillery wouldn't bomb the attacking forces down. ...read more.

At the Marne numerous fort bridges were placed across the river to halt the German advances. In August 1918 British planes destroyed the German Somme defences. This was very important. By late 1918 large bombers were developed by both sides and Britain used these to bomb towns on the continent and many people were killed or seriously injured. The German raids on Britain were more effective and killed many more people. The number of casualties then declined as their losses mounted and stopped altogether after May 1918. Bombers were generally ineffective due to the poor sights, engine problems and inexperienced pilots. The bomb damage was very small and there was hardly a direct hit. ...read more.

3.Dog fights Dogfights were mainly about domination of the air. The pilots that took part in the dogfights were very young and generally had no experience of flying. This meant the life expectancy went down. Dogfights were between British planes and the German Zeppelin. I feel in my conclusion that dogfights were not important at all o the outcome of the war. Finally, in my final conclusion, I feel that the war in the air was important in some ways and not in others. The technology was poor and the pilots had no experience whatsoever in fighting conditions in the air. The planes were not advanced enough for bombing but were for spying. The reconnaissance was good and the bombing was in some ways but the dogfights were poor and with the British technology had no chance against the Zeppelin. Edward Henderson 10L 18/11/01 ...read more.