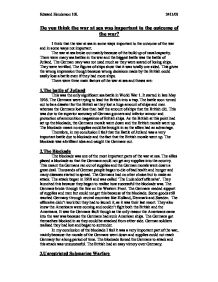 Do you think the war at sea was important to the outcome of the war?

Do you think the war at sea was important to the outcome of the war? I think that the war at sea in some ways important to the outcome of the war and in some ways not important. The war at sea broke out mainly because of the build up of naval capacity. There were many sea battles in the war and the biggest battle was the battle of Jutland. The German navy was not used much as they were scared of losing ships. They were terrified. The figures of ships show that it was totally one sided. This gives the wrong impression though because wrong decisions made by the British could easily lose a battle even if they had more ships. There were three main factors of the war at sea and theses are: 1.The battle of Jutland This was the only significant sea battle in World War 1. It started in late May 1916. The Germans were trying to lead the British into a trap. The battle soon turned out to be a disaster for the British as they lost a huge amount of ships and men whereas the Germans lost less than half the amount of ships that the British did. ...read more.

The attack began in 1918 and was called 'The Ludendorf offensive'. They launched this because they began to realise how successful the blockade was. The Germans broke through the line on the Western Front. The Germans needed support of supplies and men but could not get this because of the blockade. Some goods still reached Germany through neutral countries like Holland, Denmark and Sweden. The offensive didn't work but they had to launch it, as it was their last resort. They also knew the Americans were coming and couldn't fight both the British and the Americans. It was the Germans fault though as the only reason the Americans came into the war was because the Germans had sunk American ships. The Germans got themselves blocked in as they could be attacked from either side. German soldiers realised they had lost and began to surrender. In my conclusion of the blockade I feel it was a very important part of the war, mainly because the morale of the Germans went down and supplies could not reach Germany for a long period of time. ...read more.

Quick German construction and British failure to block off U-boat bases meant much damage still inflicted and led to shortages of supplies. This meant rationing, inflation and restrictions on imports took place. This was not enough to force the British to surrender though. In my conclusion I feel that USW was not that important as the U-boats were not able to invade Great Britain and the U-boat campaign ultimately failed but not before it had brought the USA into the war on the allied side. The Germans had no chance against two strong countries. Finally, in my final conclusion, I feel the war at sea played a crucial role in preventing German victory. They were not able to invade Great Britain and the U-boat campaign failed miserably. The Americans were brought into the war and this played an important part due to the power of the country. The navy kept supply routes to Great Britain and to the forces in France. The blockade was extremely important and this weakened the resolve of Germany to carry on fighting in the autumn of 1918. The German morale went down due to the blockade and this again was very important. Edward Henderson 10L 2411/01 ...read more.