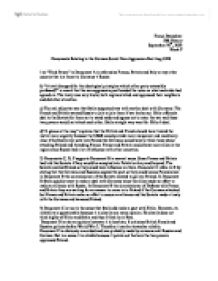 Firouz Daneshvar IBS History September 30th, 2003 Block F Documents Relating to the German-Soviet Non-Aggression Pact Aug 1939 1 a) "Third Power" in Document A is referred as France, Britain and Italy or any other country that is a threat to Germany + Russia b) "A total disregard for the ideological principles which either party ostensibly professed?" is meant that the non-aggression pact bended the rules on what each side had agreed on. The treaty was very brutal, both regimes killed and oppressed their neighbors and did other atrocities. c) The real objective was that Stalin suspected was with another deal with Germany. The French and British wanted Russia to join to join them if war broke out. Hitler offered a deal to the Soviets for them not to stand aside and agrees not to enter the war and these two powers would not attack each other. ...read more.

In Document B the commissioner of Defense tells France and Britain they are waiting for an answer to move in to Poland if the Germans attacked but France and Britain make no effort to secure an alliance and the Soviets made a treaty with the Germans and harassed Poland. 3) Document C is true in the sense that Stalin did make a pact with Hitler. However, its reliability is questionable because it is clearly one mans opinion. He clearly does not think highly of Hitler and Stalin and thus I think he is Bias. Document D is also an opinion however it is less bias. It critisizes British French and Russian policies before World War 2. Therefore it can be viewed as reliable. Document F is obviously one sided and was probably made by someone anti Russian and German. But in a sense it is reliable because it points out the how the two powers oppressed Poland. ...read more.

Since he knew the Red Army was weak he made the alliance, because certainly the Soviets would agree to such a deal. On 23rd August 1939 Nazi Foreign Minister Ribbentrop and newly appointed Soviet Commissar for Foreign Affairs Molotov, signed the Nazi-Soviet Non-Aggression Pact the two countries which until that time had been bitter enemies, agreed not to attack each other. The signing of the pact meant that if Germany attacked Poland, then the Soviet Union would not come to its aid. Thus, if Germany went to war against the West (especially France and Great Britain) over Poland, the Soviets were guaranteeing that they would not enter the war; so basically not to open a second front for Germany. . For the Soviets for agreeing to not join the possible future war, Germany was giving the Soviets the Baltic States (Estonia, Latvia, and Lithuania). Poland was also to be divided between the two the new territories gave the Soviets a buffer land. ...read more.