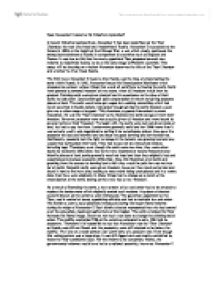 Does Alexander II deserve his historical reputation? In recent historical perspectives, Alexander II has been described as the Tsar Liberator, the man who freed and 'modernised' Russia. Alexander II succeeded to the throne in 1855, at the height of the Crimean War, a war which clearly portrayed the strong backwardness of Russia in comparison to countries such as England and France. It was due to this that the newly appointed Tsar proposed several new reforms to modernise Russia, to be at the same stage of Western countries. This essay will be focusing on whether Alexander deserves the title of the Tsar Liberator and whether he truly freed Russia. The first move Alexander II made to free Russia was the idea of emancipating the serfs within Russia. In 1861, Alexander issued his Emancipation Manifesto which proposed seventeen various things that would all contribute to freeing the serfs. Serfs were granted a personal freedom of two years, when full freedom would then be granted. Farming serfs were given plots of land in accordance to the size of their family to look after. Landowners got paid compensation in return for giving peasants pieces of land. The serfs would also get wages for working, something which had never occurred in Russia before. Alexander thought giving the serfs freedom would give me a wider range of support. This therefore, supports Alexander's current reputation. He was the 'Tsar Liberator' as he liberated the serfs and gave them their freedom. However, peasants were not actually given full freedom and were bound by several terms of their 'freedom.' ...read more.

No longer were there different courts for different classes, equality was introduced for all classes. Judges were to be better trained and paid higher wages to prevent bribery and the abuse of power that once occurred. All of these reforms were introduced to make the legal system fair by making the peasantry equal to the nobility. However, although this was what was theoretically meant to happen, the optimistic outcome did not always occur. Bribery still happened, regardless of how well paid the judges became. Judges still accepted money of people who offered it, mainly being the nobility. Therefore, the legal system was still not legitimate. Also, these reforms were not introduced to all provinces in Russia, for example, the legal system was still chaotic in the Caucus region. The military was also changed as a result of Alexander's reforms. Modern weapons were introduced and officers were given proper training. Convicts were no longer drafted into the army, thus strengthening it ass before, convicts jeopardised potential wins for the military. The length of service was also decreased from what was originally a death sentence, and generally lasted longer than life expectancy itself to 15 years active service and 10 year leave in reserve. This reserve was vast and could be mobilised whenever required. Additionally, these military reforms restored Russia's international reputation as well as Alexander's as 'Alexander the Great,' both the country and its Tsar regained their powerful reputation from when they lost it during the Crimean War. ...read more.

Censorship was once again tightened and the number of students allowed to go to university declined. He changed to a rule of repression. However, just after he was assassinated, he was planning to produce another reform, granting the Russian people a constitution. However, this was never passed as he was killed first. Therefore, if Alexander really was the 'Tsar Liberator' he wouldn't have accumulated such opposition from liberal students, and after he realised he had such opposition, he changed his stance. However, just before he was killed, he attempted to pass his final reform, the most liberal one of the lot. However, as he was killed before it was announced to the Russian public, it was never passed within his reign, so he cannot be classed as a liberator as he died before he had chance to be. Therefore, this essay concludes that although Alexander II maintained a generally liberal course throughout his reign, he does not deserve the title 'Alexander the Great' or the 'Tsar Liberator.' This is mainly due to his failures. Although his reforms were meant to liberate Russia, they never went to plan and often backfired, causing a decline in liberalism and an increase in opposition. However, if he had not have been assassinated, it is questionable as to whether he would have deserved the title then. Just before his death, he was proposing one of his most liberal reforms yet and maybe if this had gone though, he truly would have been the Tsar Liberator. However, it is not possible to say he was with the reforms that he passed as they generally lead to the citizens of Russia wanting more. ...read more.