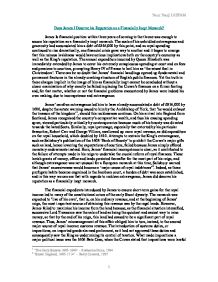 Does James I Deserve his Reputation as a Financially Inept Monarch?

Does James I Deserve his Reputation as a Financially Inept Monarch? James Is financial position within three years of coming to the throne was enough to secure his reputation as a financially inept monarch. The scale of his unbridled extravagance and generosity had accumulated him a debt of �816,000 by this point, and as royal spending continued to rise dramatically, one financial crisis gave way to another and it began to emerge that this ruinous lavishness would have serious implications both on the country's economy as well as the King's reputation. The annual expenditure incurred by Queen Elizabeth was immediately extended by James to cover his extremely conspicuous spending at court and on fees and pensions to courtiers, prompting Henry IV of France to hail him as 'the wisest fool in Christendom'. There can be no doubt that James' financial handlings opened up fundamental and permanent fractures in the already creaking structure of English public finances. Yet the truth in these charges implicit in the image of him as financially inept cannot be concluded without a closer examination of why exactly he failed in placing the Crown's finances on a firmer footing and, for that matter, whether or not the financial problems encountered by James were indeed his own making, due to incompetence and extravagance. James' carefree extravagance led him to have already accumulated a debt of �816,000 by 1606, despite the astute warning issued to him by the Archbishop of York, that 'he would exhaust the treasure of the kingdom'1, should this recklessness continue. ...read more.

This negotiated fair taxes with the Commons, in return for the abolition of their feudal payments to the crown, and other lesser revenues. The failure of this otherwise sound proposal stemmed largely from a lack of confidence felt in James' financial aptitude by many MPs, who disliked the idea of funding the King's extravagance and feared the Scots would be the major beneficiaries. Thus we can see how James' reputation as a financially inept monarch contributed to the fragmentation of an idea which could have begun to ease the problems of government finance. However, in this instance, we must too consider that despite its eventual failure, The Great Contract was a genuine attempt to tackle the root cause of the financial problem, that is, the persistent refusal of the wealthy to pay taxes which bore some realistic relation to their true incomes. In this way, perhaps James' financial abilities require some reassessment, bearing in mind his willingness to bargain with parliament over his divinely-given prerogative in order to mend the urgent situation of the Crown's debt. Furthermore, we must acknowledge that these attempts at reform, despite their lack of significant success, were nevertheless much greater efforts on the behalf of the King to curb royal expenditure and restructure the financial system than made by previous monarchs. In the same way, we must retrace our judgement of the debts accumulated by James over the length of his reign. There is certainly no denying James' absurd extravagance in the face of crippled revenues which barely covered the costs of government, yet we must consider the situation of England when James inherited it. ...read more.

Although for some of James' spending, there was a very sensible administrative and political case, for much else there was not. From the start of his reign, James displayed an extravagance that the insolvent Treasury simply could not withstand, and these together with parliamentary tensions caused by impositions and the failed Great Contract suggest why James was known as 'financially inept'. However, it has been customary to place all of the blame for the Crown's financial troubles at the time on James himself, where in fact, although managing her own finances successfully, Elizabeth did so at the cost of her successor, who thus received a throne heavily in debt following wars and inflation. Any subsequent extravagance, such as that of the royal family, was dubiously scrutinised, and instantly labelled as bad kingship. It is consequently necessary to acknowledge that despite some indisputable extravagance, James had, after all, inherited a faulty, medieval system desperate for modernisation, and he did indeed make some attempts at reform. These various efforts meant that despite a lack of considerable improvement, he left a financial situation little worse that he inherited, and thus we can conclude that essentially, James' financial extravagance did not single-handedly bring about the collapse of the Crown's finances, and his contribution to the royal Treasury's eventual complete bankruptcy, although substantial, should not have earned him the title of a 'financially inept monarch'. 1 'The Early Stuarts 1603-1640' - Katherine Brice, 1994 2 'Stuart England, 1603-1714' - Barry Coward, 1997 3 'Stuart England, 1603-1714' - Barry Coward, 1997 4 'The Origins of the English Civil War' - Conrad Russell, 1973 5 'James I' - Christopher Durston, 1993 Noor Nanji L62PAM 1 ...read more.