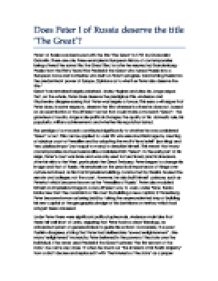 Does Peter I of Russia deserve the title 'The Great'?

Does Peter I of Russia deserve the title 'The Great'? Peter I of Russia was bestowed with the title 'The Great' in 1721 by Chancellor Golovkin. There are only three examples in European history of contemporaries being offered the same title: the Great Elector after he resurrected Brandenburg-Prussia from the Thirty Years War; Frederick the Great who turned Prussia into a European force and Catherine who built on Peter's progress, transforming Russia into the predominant power of Europe. Opinions as to whether Peter also deserve the title ' Great' has remained largely polarised. Lindey Hughes and Alex de Jonge argue that, on the whole, Peter does deserve the prestigious title. Anderson and Kliuchevsky disagree saying that Peter was largely a favour. This essay will argue that Peter does, in some respects, deserve the title whereas in others he does not, based on an examination of the different factors that could make a monarch 'Great': the grandeur of royalty, large scale political changes, the quality of his domestic rule, his popularity, military achievements and whether his reputation lasted. ...read more.

If he never used Frederick the Great's phrase 'the first servant of the state', he came very close t it when he struck out 'the interests of his Tsarist Majestry' from a draft decree and replaced it with 'the interests of the state' as a proper object of a soldier's loyalty. However, the statement of Peter being an enlightened monarch must be with caution. The Enlightenment is argued my some as not having met him and many of his reforms were generally introduced as a result of immediate necessity, rather than as part of a rational plan. The popularity of a monarch is regarded by some as being a prerequisite for being given the title 'Great'. Peter recognised that he lacked this, saying to a foreign ambassador 'I am represented as a cruel tyrant'. Traditional clergy saw Peter as an anti-Christ, while in the church in general there was distrust of his anti-clerical measures, secularization and westernisation program. The traditional nobility were alienated by the introduction of state service by the cost of war with Sweden and by the apparent westernization. ...read more.

Lastly, Peter's gain of the Baltic also resulted in the demise of Russia's traditional enemy, Sweden. Lastly, a monarch's 'greatness' can be found by assessing whether their reputation lasted after their death. At first he was the subject of a cult, proliferated by Feofan Prokopovich and later figures including Catherine the Great. During the nineteenth century views began to polarise. He was either the source of all Russian progress or a destroyer of tradition and culture. During the twentieth century views became even more ambivalent, he was portrayed on the one hand as the ultimate representative of the exploitative western system and on the other as one of the great heroes of Russian history who personally worked alongside his compatriots. Therefore, the impact of Peter the Great on Russian society and imagination is unbroken, his only serious rival being Lenin. Like Peter, Lenin's reputation was launched by the creation of a personality cult. But Lenin's cult was destroyed by the collapse of the ideology to which it was tied. Peter has now re-emerged as the key figure in Russian history as point symbolised in 1991 by the restoration to Leningrad of its original name, St Petersburg. ...read more.