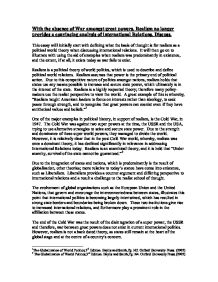 Does Realism as a statist Ideology exist today?

With the absence of War amongst great powers, Realism no longer provides a convincing analysis of international Relations, Discuss. This essay will initially start with defining what the basis of thought is for realism as a political world theory when discussing international relations. It will then go on to illustrate with using the aid of examples when realism was predominantly in existence, and the extent, if at all, it exists today as war fails to exist. Realism is a political theory of world politics, which is used to describe and define political world relations. Realism assumes that power is the primary end of political action. Due to this competitive nature of politics amongst nations, realism holds that states use any means possible to increase and secure state power, which ultimately is in the interest of the state. Realism is a highly respected theory; therefore many policy-makers use the realist perspective to view the world. A great example of this is whereby, "Realism taught American leaders to focus on interests rather than ideology, to seek peace through strength, and to recognize that great powers can coexist even if they have antithetical values and beliefs."1 One of the major examples in political history, in support of realism, is the Cold War, in 1947. The Cold War was against two super powers at the time, the USSR and the USA, trying to use alternative strategies to seize and secure state power. Due to the strength and dominance of these super world powers, they managed to divide the world. However, it is relatively clear that in the post Cold War world, whereby, realism was once a dominant theory, it has declined significantly in relevance in addressing International Relations today. Realism is an anarchical theory, and it is held that "Under anarchy, survival of the state cannot be guaranteed."2 Due to the integration of states and nations, which is predominantly is the result of globalization, other theories; more relative to today's stance have come into existence, such as Liberalism. ...read more.

equally, fairly and consistently applied throughout the member states."5 There have been instances whereby there is major dispute over decisions and policies, however, the Supreme Court will always hold precedence. An illustration of this is in the UK the acceptance of workers rights for a 48 hour week in 1996, despite a conservative majority in parliament being opposed, it was overruled by the European Court of Justice. This clearly relates back to my earlier point that state sovereignty is decreasing, as the power of the European court holds more power therefore is able to pass laws and ignore the wishes of the member states. Having the joining of the EU is believed to have some detrimental effects, such as, deceasing the sovereignty of each state, however, this can be seen as a good thing, as the EU will provide further checks and balances. When decisions are made in the EU, it becomes a long winded process as all member states have to participate. Each state has a representative minister, which comes to discuss policies in hand, and a policy cannot be agreed unless all ministers of each state agree. When there is a policy that a minister is not completely content with, they can choose to veto it, which illustrates that each state's sovereignty has not decreased detrimentally, as they are still able to exercise there views. However, each member state must keep in line with the policies of the EU, in order to remain a member. In addition, it must be taken into consideration that although each member state has the power to veto, it should only do it where necessary, otherwise it would be seen as a disruptive member. As the EU is seen as collective representative community and therefore uses qualified majority voting. If a state wishes to prevent a policy from being passed, then it must yield support from other member states. ...read more.

A prime example of this is the fact that George Bush recently, in elections lost a lot of support and power as the public were severely disturbed by the way that he has been handling foreign policy. Even though terrorism is not a great power, nor does is occupy a state of its own, the non-state actor should not be disregarded, because it has the strength to cause severe harm. In addition, terrorism enhances the need for the realist ideology, and states will refer back when they need to protect their interest, as that is the main obligation of any state leader. Finally, realism can be quite confidently said to be a highly state centered and organized theory. Most decisions in international relations today will most likely refer back to states intending to maximize their own national interest and state security, which at the heart of their concern. As illustrated earlier the Cuban Missile crisis, during the Cold War is a prime example of this. However, after the Cold War period there has been a decline in the popularity of realism, and liberalism has instead been favored. Liberalism is believed to be better for contemporary world politics, due to the increase of globalization and it also encourages negotiation amongst states and promotes peace. Non-state actors have definitely decreased the need for realism, however, realism is still not extinct as the state remains to perform a significant function in the institutions like the UN, but due to the interdependence between these states, it gives room for these mechanisms to work. 1The Globalization of World Politics,3rd Edition. Baylis and Smith,Pg 162. Oxford University Press. (2005) 2 The Globalization of World Politics,3rd Edition. Baylis and Smith,Pg 164. Oxford University Press.(2005) 3 International Relations: A Concise Introduction. M. Nicholson. Page 91. (1998) 4 The Globalization of World Politics. Baylis and Smith. Page 91. Manchester University Press. (1999) 5 Understanding the European Union. John McComick, Page 111. Palgrave. (1999) 6 Theories of International Relations, Third Edition. Scott Burchill, Page 58. Palgrave Macmillan. (2005) ?? ?? ?? ?? ...read more.