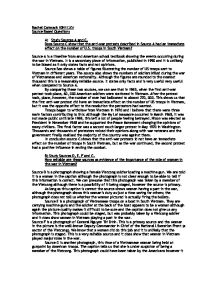 Does Source C show that the anti-war protests described in Source A had an immediate effect on the number of U.S. troops in South Vietnam?

Rachel Cormack 10H1/JGr Source Based Questions A) Study Sources A and C. Does Source C show that the anti-war protests described in Source A had an immediate effect on the number of U.S. troops in South Vietnam? Source A is a timeline from and American school textbook showing the events occurring during the war in Vietnam. It is a secondary piece of information, published in 1990 and it is unlikely to be biased as it only states facts and not opinions. Source See shows a table of figures illustrating the number of US troops sent to Vietnam in different years. The source also shows the numbers of soldiers killed during the war of Vietnamese and American nationality. Although the figures are rounded to the nearest thousand this is a reasonably reliable source. It states only facts and is very useful very useful when compared to Source A. By comparing these two sources, we can see that in 1965, when the first anti-war protest took place, 60, 000 American soldiers were stationed in Vietnam. After the protest took, place, however, the number of men had ballooned to almost 270, 000. This shows us that the first anti-war protest did have an immediate effect on the number of US troops in Vietnam, but it was the opposite effect to the resolution the protestors had wanted. Troops began to withdraw from Vietnam in 1970 and I believe that there were three main factors contributing to this: Although the My Lai massacre occurred in March 1968, it was not made public until late 1969, this left a lot of people feeling betrayed. Nixon was elected as President in November 1968 and he supported the Peace Movement changing the opinions of many civilians. The final factor was a second much larger protest in May 1970 in Washington. Thousands and thousands of protestors voiced their opinions along with war veterans and the government finally realised the majority of the country was against them. ...read more.

Source K is a very famous photograph showing Vietnamese children attempting to escape a US Napalm bombing. As it is a photograph was can be sure that it is a primary source, and judging by the US troops behind the children we can presume it was taken by an American photographer or a member of the world's press. However, the photographer was probably against the war, as a supporter would not disclose a photograph of this graphic nature because it would, and did discourage people to support the war. This may have been why the photograph was taken, propaganda to discourage civilians from supporting the war. It is to support the protests against chemical weapons and it is very unlikely for this photograph to be biased. Source L is an extract from a school textbook, which was published in 1990. The statement tells us of how the US was criticised worldwide for their use of chemical weapons. It is unlikely that this extract is biased although it could be simplified as it is in a school textbook. We do not know who wrote the source but it was written either by an English or American historian. Source M features two photographs of the same scene before and after chemical bombing attacks in Vietnam. These photographs clearly show the effects of Agent Orange on the landscape of Vietnam. This source would be very unlikely to have been staged as it is on a huge scale and it is unlikely to be biased because we know that Agent Orange did have these effects. This could have been a primary example of propaganda against the use of chemical weapons. We are not aware of the nationality of the photographer although we presume that this could be an impartial photographer who is aiming just to show the effects and this is why we can doubt that the source is biased. ...read more.

They had thousands of men posted in Vietnam and thousands more in America, with the facilities to bring these reserves into conflict at any time. However in these sources, we are also informed of the type of war the Americans were fighting, a war totally different to any they had fought before. The American troops were not trained for this type of warfare. Their enemy hid in jungles, unfamiliar to the US troops, and they used tactics, which did not involve face-to-face conflict. America's troops were excellently equipped to cope in confrontational conflict but they were no better equipped than any peasant walking through the forest when it came to detecting booby traps, a hidden enemy or a trip wire bomb. The American troops also felt uncomfortable fighting a war, which they did not morally agree with. Their families at home disagreed with the tactics used by their sons, fathers or husbands and this made troops feel guilty about what they were doing. The public at home were publicly demonstrating that they disagreed with the Vietnam War and most of the troops were not comfortable whilst performing their duties. We can tell from these sources that the troops moral was low because they knew that some of the things they were doing were upsetting a great many people. The sources however do not tell us some of the other major factors, which contributed to America losing the war. The US troops were not trained for this type of conflict; many soldiers were very young with no experience of fighting in a real war. They were fighting an invisible enemy, and the pressure caused many problems, some of which highlighted in the sources briefly. These sources provide us with skeletal structure of the war fought in Vietnam but there is not enough information here to provide us with a full and in depth description of why the USA felt they had to withdraw from a war, which should have been a quick and easy victory for a country of such power and influence. ...read more.