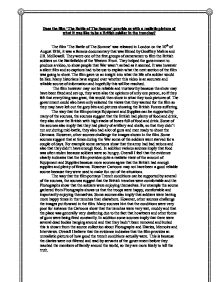 Does the film 'The Battle of The Somme' provide us with a realistic picture of what it was like to be a British soldier in the trenches?

Does the film 'The Battle of The Somme' provide us with a realistic picture of what it was like to be a British soldier in the trenches? The film 'The Battle of The Somme' was released in London on the 10th of August 1916, it was a famous documentary that was filmed by Geoffrey Malins and J.B. McDowell. They were one of the first groups of cameramen to film the British soldiers on the Battlefields of the Western Front. They helped the government to produce a video, to show people that War wasn't as bad as it seemed. It was however a silent film and so captions had to be use to explain what the next section of the film was going to show. The film gave us an insight into what the life of a soldier would be like. Many historians have argued over whether this video is an accurate and reliable source of information and hopefully this will be resolved. The film however may not be reliable and trustworthy because the shots may have been fixed and set-up, they were also the opinions of only one person, so if they felt that everything was great, this would then show in what they took pictures of. ...read more.

Some sources also imply that the British tactics worked well because in the information gathered from Newspapers it shows that many parts of the German trenches were destroyed by heavy gunners. However, other sources challenge the images put forward in the film. Many sources imply that the tactics used by the Brits were useless because they killed their own men, for example many British soldiers and civilians were killed when the gas attack on the Germans went wrong, they didn't plan for the the wind direction changing. In addition some sources state that many soldiers were killed because gunners had made the wire in front of the trenches even worse by firing the wrong type of shells, this shows bad leadership and using very poor tactics, thus the troops couldn't get over the barbed wire into the trenches. Overall I believe that the evidence indicates that the film provides an unrealistic picture of how well the British tactics worked. This is mainly due to the fact that several sources mention that the British tactics didn't work and that many men were slaughtered by the Germans. However these sources may not have been reliable as they could have only given the view of one person. ...read more.

The tactics generally worked although many British soldiers died, generally everything ran smoothly. Some of the sources I don't feel are totally trustworthy such as the information that is given by Newspapers and Photographs as these were both sets of information that the government controlled, they gave information to the Newspapers so that they could write their articles, however the government may have not given all the information to the Newspaper companies. The Newspapers also would write anything to make the paper sell to the public. Many of the Photographs look like they may have been staged or set up, so these two sources are rather unreliable. Life in the trenches appears to be pretty gruesome because there are dead bodies lying around and massive War going on outside, there is the fear that you will never see your family and friends again. Historians have been arguing for years over whether or not the film 'The Battle of the Somme' is a realistic view of what actually happened in World War I. There has been no outright decision to whether it is a realistic view or not, and historians will continue to debate over whether or not it is a reliable source to show what life was like for the British soldiers in the trenches. ...read more.

The author makes a thorough examination of the film here and compares it with a wide range of other sources. At times, more knowledge using examples and statistics would have enabled the author to judge accuracy more. The conclusion could be more definite.