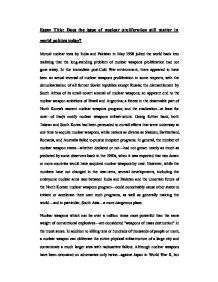 Does the issue of nuclear proliferation still matter in world politics today?

Essay Title: Does the issue of nuclear proliferation still matter in world politics today? Mutual nuclear tests by India and Pakistan in May 1998 jolted the world back into realizing that the long-standing problem of nuclear weapons proliferation had not gone away. In the immediate post-Cold War environment, there appeared to have been an actual reversal of nuclear weapons proliferation in some respects, with the denuclearization of all former Soviet republics except Russia; the dismantlement by South Africa of its small covert arsenal of nuclear weapons; an apparent end to the nuclear weapon ambitions of Brazil and Argentina; a freeze in the observable part of North Korea's nascent nuclear weapons program; and the eradication-at least for now-of Iraq's costly nuclear weapons infrastructure. Going further back, both Taiwan and South Korea had been persuaded to curtail efforts that were underway at one time to acquire nuclear weapons, while nations as diverse as Sweden, Switzerland, Romania, and Australia failed to pursue incipient programs. In general, the number of nuclear weapon states-whether declared or not-had not grown nearly as much as predicted by some observers back in the 1960s, when it was expected that two dozen or more countries would have acquired nuclear weapons by now. However, while the numbers have not changed in the near-term, several developments, including the embryonic nuclear arms race between India and Pakistan and the uncertain future of the North ...read more.

The chances that proliferation will reduce the likelihood of nuclear war are quite small. The risks therefore, are large, large enough to preclude much serious advocacy of widespread proliferation, large enough to make worthwhile efforts to understand the underlying dynamics of nuclear proliferation and to seek means to inhibit it, and, most important, large enough to justify attention and preventive action by individual states and the international community. (Ted Greenwood, Harold A. Feiveson and Theodore B. Taylor, P.28) The world now has about 20,000 nuclear weapons; there were once 65,000. It must be counted as a major miracle of the modern age that in the 60 years since Hiroshima and Nagasaki none of them has been used in anger. North Korea already claims to have nuclear weapons; estimates are from six to eight, though the claims and estimates could be wrong. Iranians deny pursuing nuclear weapons, but their denials are doubted by outside experts and undermined by Iran's incomplete compliance with nuclear inspections. There are now eight nuclear powers: the United States, Russia, China, Britain, France, India, Pakistan and Israel (suspected). The danger is not mainly increasing that number by two. It is that if North Korea and Iran have nuclear weapons, other countries would ultimately go nuclear. Then, every nuclear danger would rise dramatically: miscalculation, pre-emptive attacks, theft, a global market in weapons technology, and use by terrorist groups. ...read more.

As long as the possession of nuclear weapons offers special privileges to a nation, the tendency to join the nuclear weapon club will be irresistible. (Taylor & Francis Ltd, P.419) Nuclear weapons will remain widely spread in non-NPT states, if this problem being unsolved. In conclusion, the tide of nuclear weapons proliferation has actually been reversed in some cases in recent years, several developments-including the nuclear arms race between India and Pakistan and the uncertain future of the North Korean nuclear weapons program-could conceivably cause other states to initiate or accelerate their own such programs, as well as generally making the world-and in particular, South Asia-a more dangerous place. A few other states remain of concern as well. Iraq, with its demonstrated history of a large-scale program, appears determined to acquire a nuclear weapons capability at the earliest opportunity. So does Libya, albeit being considerably less advanced. Meanwhile, Israel shows no willingness to give up its substantial arsenal of nuclear weapons despite widespread criticism. In the short term, despite the South Asian testing, the number of states aspiring to have nuclear weapons is unlikely to grow. However, in the medium to longer-term, recent developments on the Subcontinent and on the Korean Peninsula, depending on how they play out in coming years, could have a serious impact on the international nuclear non-proliferation regime, in terms of both increasing the number of states contemplating the development of nuclear weapons, and increasing the risks of such weapons actually being used in combat. ...read more.