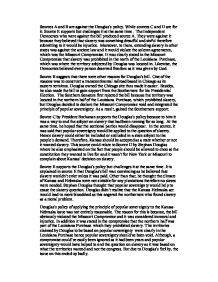 Douglass policy of applying the principle of popular sovereignty to the Kansas-Nebraska issue was not entirely reasonable.

Sources A and B are against the Douglas's policy. While sources C and D are for it. Source E supports but challenges it at the same time. The Independent Democrats who were against the bill produced source A. They were against it because they believed that slavery was something dreadful and sinful therefore submitting to it would be injustice. Moreover, to them, extending slavery in other states was against the ancient law and it would violate the solemn agreements, which was the Missouri Compromise. It was clearly stated in the Missouri Compromise that slavery was prohibited in the north of the Louisiana Purchase, which was where the territory subjected by Douglas was located in. Likewise, the Democrats believed every person deserved freedom as it was given by God. ...read more.

As a result, gained the Southerners support. Source C by President Buchanan supports the Douglas's policy because to him it was a way to end the subject on slavery that had been running for so long. At the same time, he hoped that the sectional parties would disappear. In the source, it was said that popular sovereignty would be applied to the question of slavery. Hence slavery could either be included or excluded in a state subject to the people's demand. Therefore, Kansas should be accepted as a state whether or not it wanted slavery. This source could relate to Source D by Stephan Douglas where he also emphasized on the fact that people should be allowed to choose the constitution they wanted to live for and it wasn't for New York or Missouri to complain about Kansas' decision on slavery. ...read more.

Douglas didn't realize that the Kansas-Nebraska act would lead to more bloodshed as this angered the northerners who found slavery as a moral problem. Douglas's policy of applying the principle of popular sovereignty to the Kansas-Nebraska issue was not entirely reasonable. The reason for this is because, the bill obviously violated the Missouri Compromise and it was considered immoral and injustice. In addition it was stated in the compromise that the northern half was part of the Louisiana Purchase which they prohibited slavery. The territories claimed by Douglas to be based on popular sovereignty were clearly in the Louisiana Purchase hence popular sovereignty should've been void. Although, a compromise could've easily been ignored as it had been years and popular sovereignty would have helped to end the question on slavery as it was based on what the territories wanted and not the congress. But due to Douglas's futility, the issue on this ended up badly. ...read more.