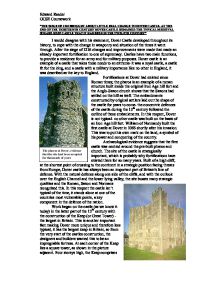 "THE SIEGE OF 1216 BROUGHT ABOUT LITTLE REAL CHANGE TO DOVER CASTLE. AT THE END OF THE THIRTEENTH CENTURY DOVER CASTLE REMAINED THE TYPICAL MEDIEVAL SQUARE KEEP CASTLE THAT IT HAD BEEN IN THE TWELFTH CENTURY" I would disagree with his statement, Dover Castle developed throughout its history, to cope with the change in weaponry and situation of the times it went through. After the siege of 1216 changes and improvements were made that made an already important fortification to one of supremacy. Castles have two main functions, to provide a residence for an army and for military purposes. Dover castle is an example of a castle that takes these needs to an extreme- it was a royal castle, a castle fit for the king, and a castle with a military importance like no other in England, it was described as the key to England. Fortifications at Dover had existed since Roman times; the pharos is an example of a roman structure built inside the original Iron Age hill fort and the Anglo-Saxon church shows that the Saxons had settled on the hill as well. ...read more.

The idea of a concentric castle was a relatively new one brought back from the Crusades. The Crusaders brought back to Europe many improvements in siege weapons and in castle design, one of the most important being the refinement of the square to the round tower, although these cylindrical towers weren't built at Dover until after the siege of 1216. The rebellion of the barons in 1215-16 caused a war between powerful barons and King John. They forced the king to sign the Magna Carta in 1215, basically forcing the king into giving the barons more power, however the king broke his promises. The barons and their armies besieged the castle at Dover with the constable of the castle Sir Hubert de Burgh and a garrison loyal to John defending the royal castle. The Barons invited King Louis of France to claim the English throne who settled his army on the high ground to the north of the castle. He attacked the main gateway to gain entry into the inner bailey using siege weapons, probably trebuchets with success. The French miners brought down the eastern of the two gate towers, enabling the French to get beyond the outer bailey. ...read more.

During these 150 years, many changes were made in methods of attack and warfare- later sections of the wall reflect the changes in attack and differ from earlier ones. The outer curtain wall is defended more strongly at certain points and at the weaker points the towers are closer together for instance. Dover castle was built over many hundred years unlike other castles, like Beaumaris in Wales for example- the designs were drawn up and strictly followed (although the castle was never completed). This makes Dover unique, the building and design of the walls changed with the change in warfare techniques, as opposed to other castles through Britain that were built to cope with contemporary attacking methods and were not modified to the extent that Dover was. I would disagree with the opening statement. At the end of the thirteenth century Dover Castle was much more than the typical medieval castle it had been in the twelfth century, it had all the refinements of the contemporary castles of the 1300's. It is unique in that it has status as the key to England, a foothold necessary for any invading army, but at the same time a castle able to withstand the test of invading armies, rebel barons and the change in warfare techniques. Edward Reeder GCSE Coursework ...read more.