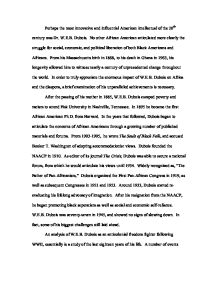 Perhaps the most innovative and influential American intellectual of the 20th century was Dr. W.E.B. Dubois. No other African American articulated more clearly the struggle for social, economic, and political liberation of both Black Americans and Africans. From his Massachusetts birth in 1868, to his death in Ghana in 1963, his longevity allowed him to witness nearly a century of unpresedented change throughout the world. In order to truly appreciate the enormous impact of W.E.B. Dubois on Africa and the diaspora, a brief examination of his unparalleled achievements is necessary. After the passing of his mother in 1885, W.E.B. Dubois escaped poverty and racism to attend Fisk University in Nashville, Tennessee. In 1895 he became the first African American Ph.D. from Harvard. In the years that followed, Dubois began to articulate the concerns of African Americans through a growing number of published materials and forums. From 1903-1905, he wrote The Souls of Black Folk, and accused Booker T. ...read more.

The second declaration was given by the President of the Congress, Dr. W.E.B. Dubois. In his authoritative address to the colonial powers, his oratory is uncompromising: Yet if the western world is still determined to rule mankind by force, then Africans, as a last resort, may have to appeal to force in the effort to achieve freedom, even if force destroys them and the world. We are determined to be free....We demand for black Africa autonomy and independence....We will fight in every way we can for freedom, democracy, and social betterment.1 The timing of the Manchester Congress was critical to its success. The rigors of another war weighed heavily on the former colonial powers. Their weakened status made their compliance with African initiatives necessary. Cold War tensions began to rise shortly after as a shift from anti-colonial politics to a paranoid anti-communist agenda began to take place. with the introduction of the Marshall Plan and the Truman Doctrine. ...read more.

Luckily, a fair and unbiased judge made his trial a rather short one, but it had achieved its purpose. The relationship between African liberation and the diaspora would never be the same as in the previous two decades. W.E.B. Dubois had viewed the problems of Black Americans and Africans alike within an internationalist context, effectively linking the African experience of colonial domination and exploitation with Black American experiences of racial discrimination and disenfranchisement in their own country. Because of a mutual struggle against oppression as well as a shared origin, Africans and African American intellectuals were able to unite in calling for an end to racial discrimination, and imperialism. 1 'A Negro Nation Within the Nation': W.E.B. Dubois and the Creation of a Revolutionary Pan-Africanist Tradition, 1903-1947. Academic Search Premier; (Vol. 32 Issue 3/4 Fall/Winter 2002), 37. 2 Leslie Alexander Lacy, Cheer The Lonesome Traveler, (New York, 1970), 97. 3 Leslie Alexander Leslie, Cheer The Lonesome Traveler, (New York, 1970), 105 ...read more.