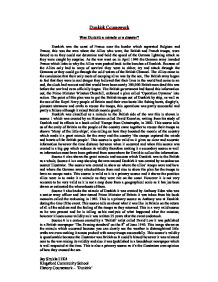 Dunkirk - A success or failure?

Dunkirk Coursework Was Dunkirk a miracle or a disaster? Dunkirk was the coast of France near the border which separated Belgium and France, this was the area where the Allies who were, the British and French troops, were forced to as they could not determine and hold the speed of the German lightning attack as they were caught by surprise. As the war went on in April 1940 the German army invaded France which links to why the Allies were pushed back to the beaches of Dunkirk. Because of the Allies only had to ways of survival they were to either, try and attack through the Germans or they could go through the cold waters of the British Channel. The Allies came to the conclusion that their only route of escaping alive was by the sea, The British army began to feel that they were in real danger they believed that their lives in the world had come to an end, the clock had run out and that would have been nearly 300,000 British men dead this was before the war had even officially began. The British government had found this information out, the Prime Minister Winston Churchill, enforced a plan called 'Operation Dynamo' into action. ...read more.

Source 6 is a cartoon created by a 'British' artist called David Low it was published in a British newspaper 'The Evening standard' on the 8th of June 1940. This image shows us the miracle which occurred because you can clearly see the weather is distraught and little crafts are even making it across packed with many troops successfully. This source's validity is questionable because the illustrator was British so It could b biased however it was released near to the war raising its validity and also it was [published in a broadsheet newspaper which is well respected at the time. This is also a primary source as it's the illustrators own opinion of how they crossed the sea. However as well as being seen as an miracle to the British army and country the Dunkirk mission of world war two was also classed as a disaster. Source 8 is taken from writing in a school history text-book called; Global war created in 1999 written by 'Josh Brooman' this source was created to use statistics to explore Dunkirk, it is also a secondary source as its info taken from another source. This source shows Dunkirk to be a great disaster as it shows the British lost from it for instance ' how ...read more.

Minister Churchill is now hiding events which has occurred in Dunkirk and he is also changing the story which he had before the event of Dunkirk happened. I believe that the disaster interpretation of Dunkirk towards Britain is more valid then the miracle section this is because in the disaster we can see that most of the sources have all direct quotes and you actually have a balanced opinion included their which was one from a German's point of view. Also the reason this is more valid was that in the miracle section most of the evidence there is a secondary source although some from highly authorised people most of the information is censored out making it not very accurate. I believe that the Dunkirk mission was a Disaster to Britain although it did raise the morale of the country it was a war not a morale booster Britain overall as a country had the most losses out of that then Germany which I believe makes it a disaster overall. Also showing how easy they thought the war would be they were unprepared for anything going to it with a victorious mind shamefully the world turned on them. ?? ?? ?? ?? Jay Shukla 11K4 Kingsford Community School History Coursework - 'Dunkirk' ...read more.