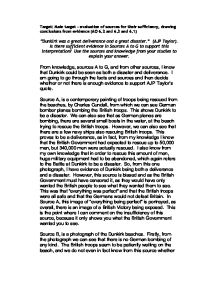 &quot;Dunkirk was a great deliverance and a great disaster&quot; (AJP Taylor) - Is there sufficient evidence in Sources A to G to support this interpretation? Use the sources and knowledge from your studies to explain your answer.

Target: Main target - evaluation of sources for their sufficiency, drawing conclusions from evidence (AO 6.2 and 6.3 and 6.1) "Dunkirk was a great deliverance and a great disaster." (AJP Taylor). Is there sufficient evidence in Sources A to G to support this interpretation? Use the sources and knowledge from your studies to explain your answer. From knowledge, sources A to G, and from other sources, I know that Dunkirk could be seen as both a disaster and deliverance. I am going to go through the facts and sources and then decide whether or not there is enough evidence to support AJP Taylor's quote. Source A, is a contemporary painting of troops being rescued from the beaches, by Charles Cundall, from which we can see German bomber planes bombing the British troops. This shows Dunkirk to be a disaster. ...read more.

This was that "everything was perfect" and that the British troops were all safe and that the Germans would not defeat Britain. In Source A, this image of "everything being perfect" is portrayed, as overall, there is an image of a British Victory being exposed. This is the point where I can comment on the insufficiency of this source, because it only shows you what the British Government wanted you to see. Source B, is a photograph of the Dunkirk beaches. Firstly, from the photograph we can see that there is no German bombing of any kind. The British troops seem to be patiently waiting on the beach, and we do not even in fact know from this source whether or not this evacuation at Dunkirk actually even took place and even if this is a Dunkirk beach, as we are having to take the sources at face value. ...read more.

Source D, is an extract from a speech by Anthony Eden, Minister of War, June 1940. Firstly, I am going to state the fact that this source is biased, as it is a speech by the Minister of War, whose job is to keep British spirits high, and so therefore, obviously he would not mention any major aspects of failure and defeat. In the Source, the Minister of War praises the British Soldiers, saying that they did not just give up, but they remained a "body of seasoned veterans". He calls them this as they have had an experience of war already. This makes the Battle of Dunkirk a deliverance as the soldiers have been said to have carried on fighting instead of giving up and this shows us that there morale was high. Anthony Eden admits to "great losses in equipment", this is a disaster as they have lost armament and expensive equipment. This source is also a form of propaganda as the speech is aimed at keeping the British spirit and morale high. ...read more.