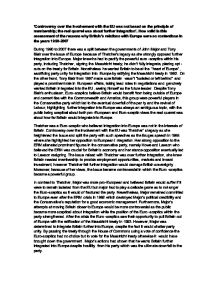 During 1990 to 2007 there was a split between the governments of John Major and Tony Blair over the issue of Europe because of Thatchers legacy as she strongly opposed further integration into Europe.

'Controversy over the involvement with the EU was not based on the principle of membership; the real quarrel was about further integration'. How valid is this assessment of the reasons why Britain's relations with Europe were so contentious in the years 1990-2007 During 1990 to 2007 there was a split between the governments of John Major and Tony Blair over the issue of Europe because of Thatcher's legacy as she strongly opposed further integration into Europe. Major knew he had to pacify the powerful euro-sceptics within his party, including Thatcher, signing the Maastricht treaty; he didn't fully integrate, placing opt-outs on the treaty for Britain. Nonetheless he wanted Britain to be at the "heart of Europe", sacrificing party unity for integration into Europe by ratifying the Maastricht treaty in 1992. On the other hand, Tony Blair from 1997 made sure Britain wasn't "isolated or left behind" and played a prominent role in European affairs, taking lead roles in negotiations and genuinely wanted Britain integrated into the EU, seeing himself as the future leader. Despite Tony Blair's enthusiasm, Euro-sceptics believe Britain would benefit from being outside of Europe and cement ties with the Commonwealth and America, this ...read more.

In contrast to Thatcher, Major was more pro-European and believed Britain would suffer if it were to remain isolated from the EU but major had to play a delicate game as to not anger the Euro-sceptics as it would of fractured the party. Nevertheless, Major remained committed to Europe even after the ERM crisis in 1992 which destroyed Major's political credibility and the Conservative's reputation for a good economic management. Furthermore, Major's attempts at moving Britain closer to Europe would be more controversial as the public became more sceptical about integration while the position of the Euro-sceptics within the party strengthened. After the crisis the Euro-sceptics saw their opportunity to pull Britain out of Europe with the ratification of the Maastricht treaty in 1993. However, Major was determined to integrate Britain further into Europe, despite the fact it would shatter party unity. By passing the treaty through the House of Commons using a vote of confidence the Euro-sceptics had no choice but to vote for the Maastricht treaty otherwise it would have brought down the government. Major's actions had shown that he wants Britain further integrated into Europe despite hostility from his party which was the ultimate downfall to the party. ...read more.

Blair knew he had to disguise the process of integration into Europe, otherwise the same situation that split Major's government would happen to Blair's and the third way successfully appeased the Euro-sceptics. The issue of further integration was so controversial that the only way to get Britain further into Europe was to mask the process, as seen with the ratification of the Maastricht treaty and Blair's third way speech. Nevertheless, Blair wasn't fully able to integrate Britain fully, as his vision of replacing the pound sterling with the Euro was blocked by Gordon Brown who denounced Blair's plans, highlighting that Blair's aims of European integration would never succeed as long as the Euro-sceptics held powerful positions. British relations with Europe were so contentious because from 1951 the British public have been told different theories as to why Britain needs Europe. Churchill said Britain doesn't need Europe because of the many colonies and strong economy. But after the decline of the economy, Macmillan told the public Europe is needed in order to revive the economy. Events such as De Gaulle vetoing and Black Wednesday have shrouded the public's positive attitude towards Europe and there is only a small minority of Pro-Europeans in Britain who accept the whole principle. ...read more.