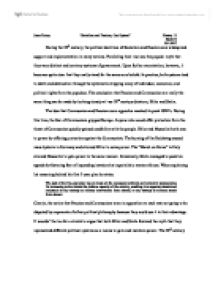 During the 20th century, the political doctrines of Socialism and Fascism saw widespread support and implementation in many nations.

During the 20th century, the political doctrines of Socialism and Fascism saw widespread support and implementation in many nations. Paralleling their rise was the popular myth that they were distinct and contrary systems of government. Upon further examination, however, it becomes quite clear that they really stand for the same core beliefs. In practice, both systems lead to death and destruction through the systematic stripping away of individual, economic, and political rights from the populace. The conclusion that Fascism and Communism are really the same thing can be made by looking closely at two 20th century dictators, Hitler and Stalin. The idea that Communism and Fascism were opposites reached its peak 1930's. During this time, the fear of Communism gripped Europe. Anyone who could offer protection from the threat of Communism quickly gained credibility with the people. Hitler and Mussolini both rose to power by offering protection against the Communists. The burning of the Reichstag caused mass hysteria in Germany and allowed Hitler to seize power. The "March on Rome" in Italy allowed Mussolini to gain power in the same manner. Conversely, Stalin managed to push his agenda by fostering fear of impending invasion by imperialistic western forces. When explaining his reasoning behind his first 5-year plan he states: The task of the five-year plan was to create all the necessary technical and economic prerequisites for increasing to the utmost the defence capacity of the country, enabling it to organize determined resistance to any attempt at military intervention from abroad, to any attempt at military attack from abroad. ...read more.

My father... carried a communist card and wore a fascist Falangist uniform in Spain at different moments in the 1930s. A historical example of the similarities Fernandez-Armesto is talking about can be found by comparing Hitler's rule in Nazi Germany and Stalin's rule in Soviet Russia. Both Hitler and Stalin shared the goal of attaining power. To this end, they quickly set about redirecting all the power that existed in the country and centering it in themselves. The press along with the education system was transformed into a propaganda machine. To maintain complete control over the populace secret police were established. The SS of Germany and the NKVD of Soviet Russia terrorized the populace into submission. All the property of the state became the property of the party. Stalin seized all private property while Hitler simply enslaved the individuals that owned private property as he explains: Of what importance is all that, if I range men firmly within a discipline they cannot escape? Let them own land or factories as much as they please. The decisive factor is that the State, through the Party, is supreme over them regardless of whether they are owners or workers. All that is unessential; our socialism goes far deeper. It establishes a relationship of the individual to the State, the national community. Why need we trouble to socialize banks and factories? ...read more.

Not only were the tactics used by Stalin and Hitler alike, but the consequences of those tactics were also. At the root of Fascism and Communism is the idea that the group is superior to the individual. Morality was reduced to a question of whether or not a particular action benefited the group. In the name of the Aryan Race, or the Proletariat, anything, or anyone, could be sacrificed to the cause. Entire segments of the population was wiped out in both nations. The Kulaks of Russia and the Jews of Germany were all but eliminated. Mass murder was also used during the purges of both nations. The death toll of Stalin's regime is measured at 42 million of his own citizens. Hitler murdered 20 million during his reign. By looking at their regimes it should be quite clear that there is no difference between Communism and Fascism, the only thing both have to offer is a blood bath. While many historians are recognizing the similar nature of Fascism and Communism even today two systems of government are still thought of as differing significantly. With the events of World War 2, and the years preceding it, an ever fading memory to the public at large the Fascism/Communism dichotomy is bound to be revived. It is, therefore, important to recognize that the only alternative to Communism, or Fascism, is freedom, not a different kind of dictator. Jesse Ritcey "Socialism and Fascism, One System" History 12 Block B 05/10/07 ...read more.