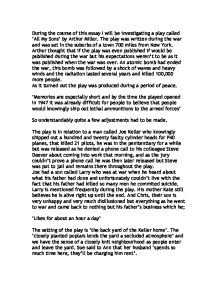 During the course of this essay I will be investigating a play called 'All My Sons' by Arthur Miller.

During the course of this essay I will be investigating a play called 'All My Sons' by Arthur Miller. The play was written during the war and was set in the suburbs of a town 700 miles from New York. Arthur thought that if the play was even published if would be published during the war but his expectations weren't to be as it was published when the war was over. An atomic bomb had ended the war, this bomb was followed by a shock of waves and heavy winds and the radiation lasted several years and killed 100,000 more people. As it turned out the play was produced during a period of peace. 'Memories are especially short and by the time the played opened in 1947 it was already difficult for people to believe that people would knowingly ship out lethal ammunitions to the armed forces' So understandably quite a few adjustments had to be made. The play is in relation to a man called Joe Keller who knowingly shipped out a hundred and twenty faulty cylinder heads for P40 planes, that killed 21 pilots, he was in the penitentiary for a while but was released as he denied a phone call to his colleague Steve Deever about coming into work that morning, and as the jury couldn't prove a phone call he was then later released but Steve was put to jail and remains there throughout the play. Joe had a son called Larry who was at war when he heard about what his father had done and unfortunately couldn't live with the fact that his father had killed so many men he commited suicide. Larry is mentioned frequently during the play. His mother Kate still believes he is alive right up until the end. And Chris, their son is very unhappy and very much disillusioned but everything as he went to war and came back to nothing but his father's business which he; 'Likes for about an hour a day' The setting of the play is 'the back yard of the Keller home'. ...read more.

By Tuesday 29 October so many shares were being sold that the teleprinters could not keep up, share prices continued to fall, and people lost vast sums of money and were ruined. Reasons linked to overproduction that led to the Wall Street Crash: 1. Companies were producing too many goods. 2. American goods could not be sold abroad because other countries had put tariffs (taxes) on them to make them more expensive. 3. When the demand for goods began to fall, workers' wages were cut and some workers became unemployed, which meant that they could no longer afford to buy the new consumer goods. 4. Farmers could not afford to buy the new consumer goods. Service draft boards registered 31 million men. Including volunteers, more than 15 million men and women served in the Armed Forces during the war. During the war the working force at home increased from over 46 millions to 53 million. (Lydia Lubey makes clothes in her house.) Although 2 millions people suffered from sub-standard incomes, most families benefited financially during the war. Gross weekly wages rose from $25.20 to $43.39. However, the cost of living also rose and most workers had to pay income tax for the first time. Ann spent 3 weeks wages on a dress, which shows just how expensive life was in New York. The cost of living went up by 25% between 1939-1945. Personal income was more or less useless as the availability of goods and services was very low. The government gave every family ration books, or food allowance. At food shops you could use stamps if you were given them to buy 450 g of sugar every two weeks. America's factories ran day and night. Americans made 300,000 warplanes at a cost of $45 billion. When Steve shipped out those faulty cylinder heads, (Joe rang in and said he was sick with the flue) ...read more.

George and Chris made a few comments about Frank; George: He won the war, Frank. Chris: All the battles. Kate also made a comment about Frank, she said; 'next door he never reads anything but Andy Gump has three children and his house paid off. Stop being a philosopher and look after yourself.' Then Kate went on to lecture George on how he should off married 'that girl (Lydia) and stay out of the war'. Larry was out in war when he found out about the actions of his father, he sent a letter to his 'then' girlfriend telling her of his whereabouts and how he was feeling. He killed himself. He drove his plane of the west coast of China. Joe always thought that Larry would have understood that what he had done was for the family but he was devastatingly mistaken and that mistake drove him to shoot himself. He couldn't live with himself just as Larry couldn't live with Joe's actions. In conclusion this play has given me an unambiguous insight into American society. This society seems to be happy, comfortable and prosperous. The ideal community. But underneath the faultless society lies the heartbreak and hardship from the war. The families are forced to deal with the tension and unpleasant truths that emerge years after the conflict broke out. This play shows just how close the boys were in the war and how close their friendships were; they literally died for each other. And what Joe never realised was that the pilots he was shipping the cylinder heads out to were like his sons; and unfortunately he was their worst enemy. I will end this piece of coursework with a quote from Arthur Miller himself; ''i think the essence of the tale remains what it always was, that there is a society out there and one has certain responsibility toward it if only on a purely human level, if one may speak in those terms.' Arthur Miller, January 13th, 2003 Laura Clinton 11a1 ...read more.