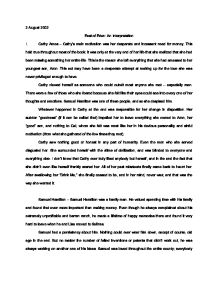 East of Eden: An Interpretation

2 August 2002 East of Eden: An Interpretation I. Cathy Ames - Cathy's main motivation was her desperate and incessant need for money. This held true throughout most of the book; it was only at the very end of her life that she realized that she had been missing something her entire life. This is the reason she left everything that she had amassed to her youngest son, Aron. This act may have been a desperate attempt at making up for the love she was never privileged enough to have. Cathy viewed herself as someone who could outwit most anyone she met -- especially men. There were a few of those who she feared because she felt like their eyes could see into every one of her thoughts and emotions. Samuel Hamilton was one of these people, and so she despised him. Whatever happened in Cathy at the end was responsible for her change in disposition. Her sudden "goodness" (if it can be called that) impelled her to leave everything she owned to Aron, her "good" son, and nothing to Cal, whom she felt was most like her in his devious personality and sinful motivation (from what she gathered of the few times they met). Cathy saw nothing good or honest in any part of humanity. Even the men who she served disgusted her. She surrounded herself with the slime of civilization, and was blinded to everyone and everything else. I don't know that Cathy ever truly liked anybody but herself, and in the end the fact that she didn't even like herself frankly scared her. All of her past misdeeds finally came back to haunt her. After swallowing her "Drink Me," she finally ceased to be, and in her mind, never was; and that was the way she wanted it. Samuel Hamilton - Samuel Hamilton was a family man. He valued spending time with his family and found that even more important than making money. ...read more.

After Adam left with his share, Charles was the wealthiest farmer in the area and the most respected. Charles knew how to do one thing well: farm. He lived for farming, and he did it until the day he died. He made a considerable amount of money in his lifetime too, but never got around to enjoying it. Charles was a loner. He didn't have any close friends, and as far as we know was only married for a short time while Adam was in the Army. Other than that he was a homebody, and didn't socialize much (except for his late night excursions to the local inn). He died never seeing any other part of the country, never living in any other house, never doing anything other than that which he had been doing his entire life. And while it never made him happy, it seemed to be enough for him. Adam Trask - Adam was mistreated throughout most of his childhood by his father and brother. All Adam wanted was to be happy, in his own way. He didn't want to live under the pressure of his father, always competing with his brother. He didn't want to go into the Army, and he didn't want to go back to the farm in Connecticut. I think Adam lived for the happiness that the next day would bring, not knowing what it would be, or from where it would come. That's how he got through the first half of his life, and that's how he came upon Cathy and how the second half began. Adam lived for Cathy Ames and would have done anything for her. Like Steinbeck described, his first year with Cathy was the first time Adam really felt alive. She was his world. When she left, not even the twin boys she left behind were enough to keep Adam going. And so, he fell into a deep depression, melancholy for nearly eleven years. ...read more.

Both of these versions seemed to condemn sinners to their misdeeds without hope of redemption. However, Lee discovered that in the original hebrew text, the significant word in the conflicting sentence was actually "timshel," or "thou mayest." This, of course, would allow each individual to be in charge of his own moral destiny. It was Cal who mainly feared that the sins of his mother would come back to condemn him because he reasoned that the same blood flowed through his veins, but "timshel" would relieve this. The significant character blessed with this enlightenment was Cal. After Cal learned that Aron was dead, and knowing that it was his fault, he goes to his father where Lee speaks for him. Lee asks Adam to forgive his son and to free him from his sins. Adam's response, "timshel," symbolically freed Caleb as he was now free and in charge of his own destiny without having his past sins, or the sins of his parents holding him back. VI. Beginning with my dislikes, I disliked the chapters that seemed to slant away from the rest of the story; the chapters of Olive Hamilton especially. These chapters seemed to have no effect on the Hamiltons or the Trasks. I found them pointless, but I also may have missed an underlying reason for their place in the book. Regardless, I liked the book very much. I thought it was well-written and very well thought out. The action parts were the best, but it moved at an understandably slow pace to reveal every significant thing that happened, but moved fast enough to keep me, the reader, entertained. It shocks me how much research Steinbeck must have had to do simply to develop the concept for East of Eden, but I think his time was well spent. And it was obviously worth it, for now, almost 50 years later, it is still widely read. I thoroughly enjoyed the story. ?? ?? ?? ?? ...read more.