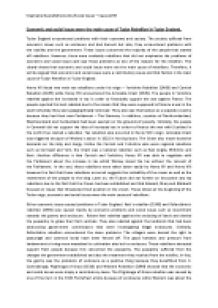 Economic and social issues were the main cause of Tudor Rebellion in Tudor England. Discuss

﻿Stephanie BuenafeEconomic/Social issues ? CausesCHE Economic and social issues were the main cause of Tudor Rebellion in Tudor England. Tudor England encountered problems with their economy and society. The society suffered from economic issues such as enclosure and bad harvest but also, they encountered problems with the nobility and the government. These issues concerned the majority of the people that started off rebellions. However, there were evidently rebellions that did not emphasise the problems of economic and social issues and saw these problems as one of the reasons for the rebellion. This clearly shows that economic and social issues were not the main cause of rebellions. Therefore, it will be argued that economic and social issues were a contributory cause and that faction is the main cause of Tudor Rebellion in Tudor England. Henry VII faced two main tax rebellions under his reign ? Yorkshire Rebellion (1489) and Cornish Rebellion (1497) while Henry VIII encountered the Amicable Grant (1525). The people in Yorkshire rebelled against the increased in tax in order to financially support the war against France. The people rejected this and rebelled due to the reason that they were supposed to finance a war in the south whereby they were geographically removed. They also saw themselves as a separate country because they had their own Parliament ? The Stannery. In addition, counties of Northumberland, Westmoreland and Cumberland had been exempt on the grounds of poverty. ...read more.

Elizabeth saw no threat with problems with enclosure because Oxfordshire was not able to attract support. The problems with enclosure were not seen as a big problem as it was under Edward because of Edward was a minority and was not able to control the problems presented to him. Some rebellions emphasised that the economic issue and resentment to the gentry were the main cause for the rebellion however, economic and social issues were mostly seen to gather popular support as this issue affected everyone nationally because of the economic problems Tudor England had. Clearly only a number of people were not motivated by economic and social issues. Some rebellions may have used economic and gentry resentment as a subsidiary cause however they may had been driven by other causes, and one of these was faction. For instance, Warbeck (1491-7) and Simnel (1486-7), Essex (1601), Northern Earls (1569), Wyatt (1554) and the Devise for succession (1553) main cause for rebellion was faction. Warbeck and Simnel were pretenders who challenged the throne to overthrow Henry VII. They were supported by leading Yorkists such as John de la Pole, Earl of Lincoln and Sir Edward Brampton, a Yorkist sympathiser. Both pretenders not only attracted support nationally but were able to receive foreign support from Scotland and Burgundy through Margaret of Burgundy. On the other hand, Mary was able to encounter problems with faction. ...read more.

Similar to Northern Earls, Kett rebelled against the lack of quality of preachers and residential incumbents in their diocese. Wyatt, on the other hand, downplayed religion and highlighted faction but motivated by religious grievances against Mary. 8 out of 14 leaders in Wyatt?s rebellion were protestant and supported for the rising in Maidstone where Mary?s martyrs came from. Therefore, religion was an important source of discontent after Henry VIII?s reign up to Elizabeth?s reign. Henry VII did not encounter such problems as he focused on the improvement and the stability of the crown and the economy of England. In conclusion, economic and social issues were simply a subsidiary cause for a more important cause of rebellions in Tudor England. It can be seen that throughout the period, problems with religion were stated. Many rebellions used religion as a propaganda tool for a bigger cause of rebellion. However, notable for the peasantry, the issue of religion was an important cause of rebellion in the middle of the period. In times of economic disasters such as enclosure and taxation showed that poverty is enough to start a rebellion. Then again, this was not clearly the most important cause of rebellion throughout the period as some rebellions occurred when Tudor England?s economy was stable, for instance, Wyatt and Northern Earls. As a final point, faction were the most consistent cause of rebellion and this was also seen as the most important as people with financial and political resources were capable of launching a threatening rebellion. It is also seen throughout the whole period which suggests its importance. ...read more.