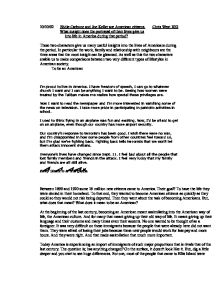 Eddie Carbone and Joe Keller are American citizens. What insight does the portrayal of their lives give us into life in America during that period?

10/10/02 Eddie Carbone and Joe Keller are American citizens. Chris West 10D What insight does the portrayal of their lives give us into life in America during that period? These two characters give us many useful insights into the lives of Americans during the period. In particular the work, family and relationship with neighbours are the three areas that the most insight can be gleamed. As well as this the two characters enable us to make comparisons between two very different types of lifestyles in American society. To be an American I'm proud to live in America. I have freedom of speech, I can go to whatever church I want and I can be anything I want to be. Seeing how women were treated by the Taliban makes me realize how special these privileges are. Now I want to read the newspaper and I'm more interested in watching some of the news on television. I take more pride in participating in patriotic activities in school. I used to think flying in an airplane was fun and exciting. ...read more.

And for many that meant giving up their old way of life. It meant giving up their language and their customs and many times even their accents. No one wanted to be thought of as a foreigner. It was very difficult on these immigrants because the people that were already here did not want them. They were afraid of losing their jobs because these new people would work for less pay and more hours. And they were right. And that made assimilation that much more important. Today America is experiencing an import of immigrants of such major proportions that is rivals that of the last century. The question is; has anything changed? On the surface, it doesn't look like it. But, dig a little deeper and you start to see huge differences. For one, most of the people that came to Ellis Island were white Europeans. Today over half are Latin or Spanish speaking people. And like it or not it is harder to fit in when you look different. Another big difference is in the word, Assimilation. Last century it was the norm. Today, the new immigrants are fighting it. Why? ...read more.

No giving up anything. No throwing away any languages or cultures or way of lives. Just learning and understanding. So, what is it that we need to learn and understand in order to be a good American? And how do we do it without giving up our way of life? The answer is a relatively simple and short document. The Constitution of the United States, that incredible piece of paper that the entire structure of the United States is built on. Take a moment and read it. You won't be sorry. It says, in short, that everyone who is a citizen has the same opportunity to have the life they want as does the next citizen. And the laws we make today convey and protect that right. So the next time you wonder if you are an American or even want to be, remember the Constitution and think of all the countries in the world that don't have it and the kind of life they offer. And when you have read it and understand it you can tell anyone and everyone what it is to be an American and you are proud to be here and to do your part in protecting it and what it stands for. ...read more.