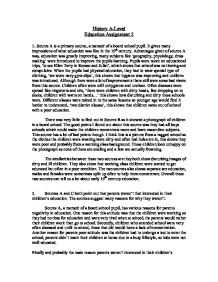 Education in the 19th Century

History A-Level Education Assignment 2 1. Source A is a primary source, a memoir of a board school pupil. It gives many impressions of what education was like in the 19th century. Advantages given of source A was, education was greatly improving, many subjects like 'geography, physiology, dress making' were introduced to improve the pupils learning. Pupils were taken on educational trips, 'to see Ellen Terry in Romeo and Juliet', which shows that school was not boring and compulsive. When the pupils had physical education, they had to wear special type of clothing, 'we wore navy gym slips', this shows that hygiene was improving and uniform was introduced. Although there were a lot of improvements there still were some bad views from this source. Children often were still unhygienic and unclean. Often diseases were spread like ringworm and nits, 'there were children with dirty heads, lice dropping on to desks, children with warts on hands...' this shows how disturbing and dirty these schools were. Different classes were mixed in to the same lessons so younger age would find it harder to understand, 'two district classes', this shows that children came out of school with a poor education. ...read more.

Finally and probably the main reason parents weren't interested in their children's education was the cost, '6d per week', Parents couldn't afford to spend this as working class families earned very little and they had to pay for their food & drinks etc. Source C, a section of a book by Jean Morgan published by Leeds university in 1984 also has many reasons for parent lack of attitude towards education, but it is a secondary source which can be a little bias or fictional. The first reason for children's poor attendance was bad weather conditions. Pupils, especially smaller infants, would not attend school. Secondly, older children didn't get properly educated, they often looked after the infants and were taught very little. Finally parents didn't think school was important thus created a lack of attendance. Both sources tell us a lot about parents attitudes towards their children's education. Both sources mention the fact that illness often caused periods of time off school. They also mention that the children worked so fitting time for education also was very difficult. These sources do suggest that parents had a part in the under-achievement among poor children in Yorkshire but it's not all their fault, hygiene & quality of education was also a factor. ...read more.

Source A also shows that their were no medical checks in schools. This meant that if one child caught a disease it could have spread easily, which meant a lack of attendance still. Source B, a photo of children in a board school shows that the children were dirty and unhygienic, it also suggests that the children have come from work due to the dirt. Children were tired after work in a morning and often too tired to attend school. Source C says that children had to be persuaded to attend school, which shows the act was limited. Source D shows that girls were more important at home than boys to do domestic work like cleaning, baking etc. This supports the idea that the act was limited as parents wanted their children to stay at home rather than making them attend school. Source G says that women were complaining about their children getting caned/beaten in school, which shows that parent's weren't in favour of school discipline and not supporting the 1870 act. I couldn't get anything that proofed the 1870 education act was limited in Sources E, F & H. ...read more.